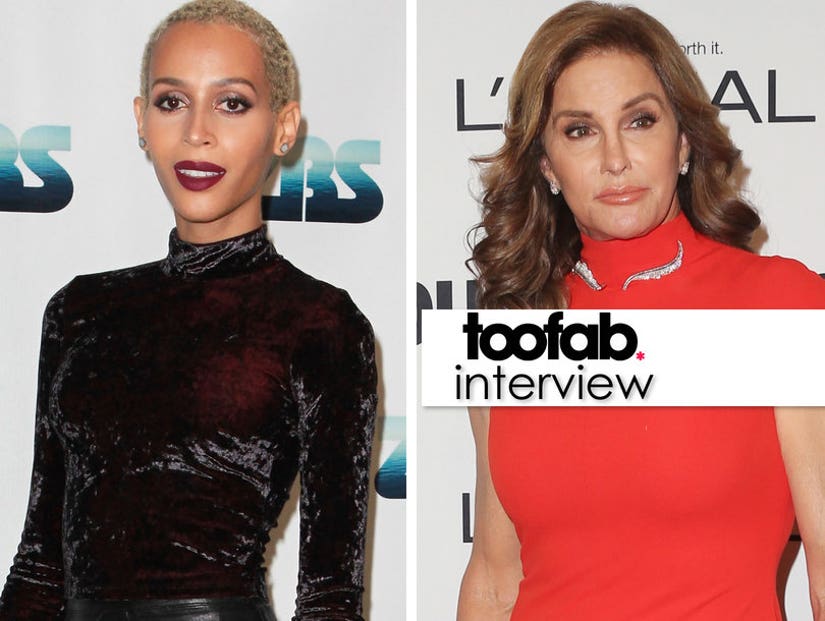 "America's Next Top Model" first transgender model Isis King detailed why she felt compelled to call out Caitlyn Jenner over her response to Trump's roll backs of transgender student protections.

King blasted Jenner earlier Friday in a scathing open letter on Twitter which prompted the "I Am Cait" star to reach out to King via telephone hours later.

In the letter, King said she ran into Jenner at the TransNation Queen USA Pageant in Los Angeles back in October. But instead of exchanging pleasantries when they came face to face, King said "Caitlyn and her handler walked in front of me as if I had not been waiting and straight into the empty elevator." Jenner's handler then allegedly asked King, "I'm sorry. Can you wait until the next one comes?"

"I could not believe this happened to me, and immediately felt as if I had just been told to move to the back of the bus," King wrote, "It was as if I was not good enough, not worthy enough, not rich enough, not famous enough to ride with these three white women. Wasn't I also there as a special guest?"

TooFab's Sarah Taylor spoke to King on what exactly are her issues with Jenner and what she thinks of Trump's latest move regarding the transgender community.

TooFab: Why did this particular Caitlyn video to Trump prompt you to speak out about the elevator incident?

Isis King: I personally am not one to avoid confrontation. It was on my heart when I saw the original clip to say something now. I never was going to say anything, but 15 minutes ago Caitlyn called me and we resolved everything. We resolved the elevator incident. I appreciate her calling me.

Is the response you're seeing online mostly against or for you?

It was definitely in support of me. Like I said, I just feel like the community needs my voice now more than ever. I come from 'Top Model' and I have that large fan base and want them to know that we are fighting for them. It's important especially now. I'm thankful that it was positive feedback. It brings more awareness to the Trump administration and what they're doing.

I didn't think it was going to go so wild; I'm usually pretty light on Twitter, tweeting about things that I watch on TV, but it's important for me, Cait and Laverne [Cox] to have conversations to let youth know that we stand with them. It's the most important thing.

Why do you think a large portion of the LGBTQ community has turned on Caitlyn?

I think that Caitlyn's experience doesn't mirror so many of the youth of the trans community, especially of color. She's so different. She's established and I just think that that has a big part to do with it. If she continues to do the best that she can then that's all that she can do, but that is a big reason [some have turned against her]. It's so hard for everyone involved.

Do you think "I Am Cait" did a disservice to the trans community?

I don't think it did. It's bringing up trans awareness. It's bringing more attention to what's going on, and more visibility on TV can only be good for us. If you have a different viewpoint or not, it's important to show that we can't be lumped together. Everyone is different. Whether you're younger or older, trans is different. Seeing how complex we are as trans people ... each one of us are different. I think that's important.

I think we should all be on the same page because it's a fight that we're all fighting together and it's going to affect us as trans people. Regardless of what your difference is, we know that we all have to fight together and have equal everything. That's the finish line.

If you had a face to face with President Trump and his administration about the bathroom protections what would you say to them?

That's hard because so many people at this point have said something or they have to know what has been done to people, what is being done to the kids. They know. This is a different day and age. Trans people are not backing down, not accepting what's given to us, standing together -- standing stronger than ever, more vocal than ever -- and only conquering together.

This rollback might be a slight freeze in our movement, but along with so many other things going on like immigration and other issues it's not just trans issues anymore and all these different things that are going on are bringing people together more and more. It's important. We're in a unique time and we're not going to sit back and accept what's given to us. At the end of the day we all have to be together and talk about things that matter. A conversation is important. We have to be in this together.