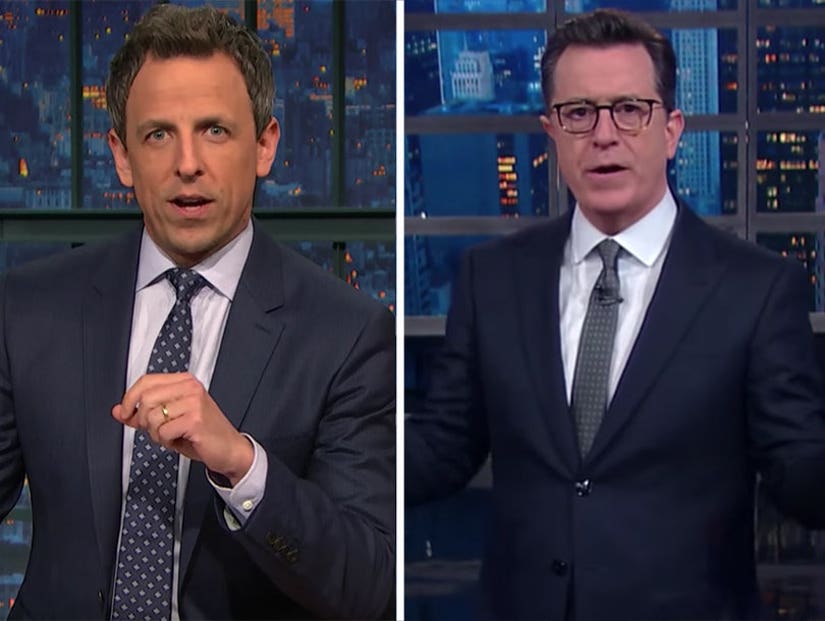 "During the election you told the LGBT community, 'I will fight for you,'" Meyers said on "The Late Show" on Thursday. "Did you not mean to include the word 'for?'"

Watch the best three late-night segments diving into the topic below.

Meyers opened his show with a segment called "Hey! Transgender Kids," and addressed Trump's hypocrisy on the bathroom ban.

"There's apparently this fear that transgender kids are using it as a ruse to sneak into restrooms and grab people by the genitals, but if you're looking for the kind of person who would do that, then you need to look no further than the Oval Office," Meyers said.

Animation experts on "The Late Show with Stephen Colbert" took resistance to a whole other level with bathroom signs on Thursday night.

Colbert introduced the clip by referencing the "brave souls that point the way to our nation's bathrooms."

In the above clip, men's and women's bathroom signs come together to show that they aren't standing for the trans bathroom ban, and have suggestions for both those affected by the ban and the president himself.

See more: Whoopi and 'The View' Ladies Are Livid at Trump for Rolling Back Transgender Student Rights

TRANS PEOPLE WANT TO TAKE A DUMP IN TRUMP TOWER

Addressing the president's ban himself, Colbert rationalized Trump's decision by saying, "If there's one thing Trump is famous for it's telling people where to pee."

Playing footage of the president telling "Today" that he would be all right with Caitlyn Jenner using whatever bathroom she saw fit to use, Colbert clapped back: "Good, because I'm guessing right now a lot of trans people would love to take a dump in Trump's lobby.

See more: Why Jackie Evancho is 'Disappointed' in Trump: Let My Transgender Sister and I Enlighten You (Video)

Watch the video above for the rest of the hilarious -- but totally on point -- segment.