The “Vanderpump Rules” crew's tumultuous New Orleans trip rolled on Monday night, and it was very, very, very difficult to take anyone seriously when half the boys were still dressed in drag and Tom Sandoval is tearfully referring to Tom Schwartz as a “battered wife.”

“If I can just slit Sandoval's throat and just get him off the face of the f--king earth then Schwartz won't act like this anymore, I swear to God. He never acts like this unless he's around f**king Sandoval,” an angry Kristen said to fellow cast members while in Katie and Tom's hotel suite.

Meanwhile in the hallway, Jax advises Schwartz to apologize to Katie for cheating on her in Vegas.

Meanwhile in the hallway, Jax advises Schwartz to apologize to Katie for cheating on her in Vegas.

Back home in L.A., Lisa Vanderpump was busy running her restaurants, but not too busy to offer Katie some motherly advice.

“Nothing's that important that you need to be fighting right now, trust me on that one,” Lisa said to Katie when she called. “The hard work in a marriage starts later.”

“Tough times are inevitable, and if Tom and Katie can't have a good time on their bachelor party, when can they?” Vanderpump said in a confessional.

Perhaps the best part of the episode was Sandoval's gift to the groomsmen: custom T-shirts. Jax's said “Sun's Out Dumb's Out,” Ariana got “Boriana,” Sandoval's said “I'm Straight” (in quotation marks), Carter got “I'm with Crazy,” Shay's said “Ask my Wife,” and Schwartz got “Tom #1.”

“You know what, Tom, you had an option back then,” Katie said in what feels like the couple's 12th argument of the trip. “And you put a ring on my f--king finger, so stop throwing it in my f--king face. We're getting married, and when I just feel like there's a slight trust thing still, then I feel like…”

“You can trust me,” Tom interrupts her as he squirts whipped cream into his mouth, straight from the can.

The last night of their trip was spent playing a mature game of spin-the-bottle (because they haven't all already made out with each other), where Tom Squared spent an alarming amount of time locking lips.

In the end, though, Schwartz and Katie kiss and make up (and, spoiler, end up getting married IRL). 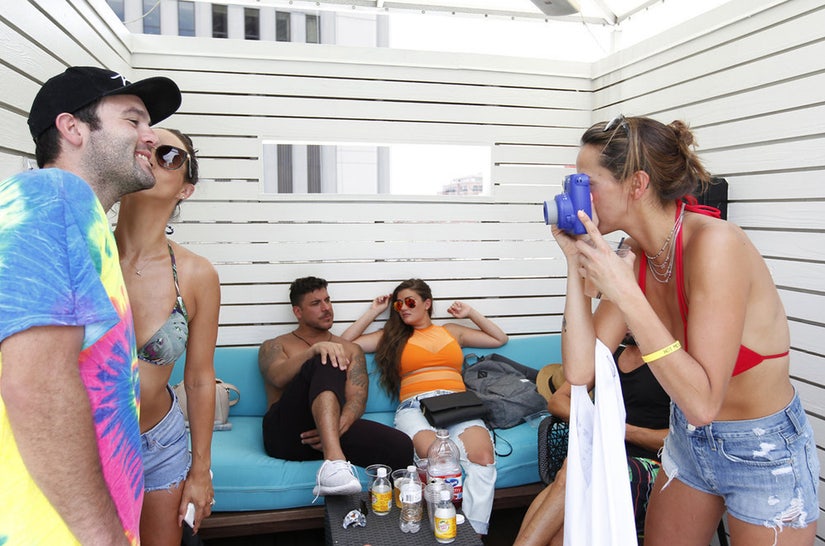