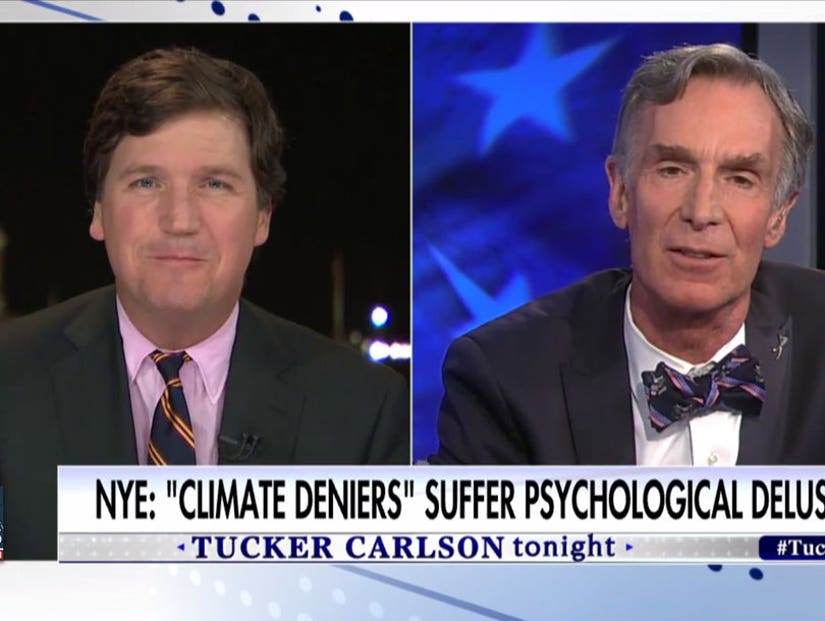 Tucker Carlson tried really hard Monday night to pretend he knows more about climate change science than Bill Nye - a man who has dedicated his life to educating the public about science and has been studying climate change for years.

As usual, the Fox News host welcomed a guest onto his program only to try to discredit his knowledge on the subject, but Nye - a mechanical engineer who hosted "Bill Nye the Science Guy" on PBS in the '90s and has since written books about science while also receiving honorary degrees from major universities - wasn't having it.

The conversation was erratic, as it consisted of Carlson asking Nye questions, Nye answering them with ease, and then Carlson getting flustered and telling Nye to slow down while insisting Nye didn't actually answer his questions. By the end of it, Nye looked exhausted, since he literally timed the amount of time it took between Carlson asking a question and interrupting the answer. "Less than six seconds."

Carlson introduced his guest by saying, "Bill Nye 'The Science Guy' is now aspiring to a new title: Bill Nye 'The Psychoanalyst Guy,'" because Nye said (according to Carlson) that "skeptics of global warming suffer from the psychological delusion of cognitive dissidence."

"So cognitive dissidence is not a delusion, it's a feature. It's human nature," Nye explained. "So we in the science community are looking for an explanation why climate change deniers - or extreme skeptics - do not accept the overwhelming scientific evidence for climate change. And the most reasonable explanation is you have a world view and then you have evidence, and the evidence disagrees with your world view, so you deny the evidence and then along with that you deny the authorities that are providing the evidence. Now if you have a better hypothesis... bring it on.”

Carlson argued "the essence of science is extreme skepticism," to which Nye responded, "I'm a member of both skeptic organizations, Mr. Carlson. Climate change denial is denial. The evidence is overwhelming."

Carlson's next subtle attempt to diminish his guest was to point out the climate "has always changed, as you know" - but Nye immediately pointed out, it's not the change scientists are worried about, it's "the rate" at which change is occurring.

"No, hold on. Slow down," Carlson interrupted. "The core question, from what I can tell, is why the change? Is it part of the endless cycle of climate change or is human activity causing it? That seems to be the debate to me, and it seems to be an open question, not a settled question, to what degree human activity is causing that."

Nye calmly responded to the man with no science background, "It's not an open question. It's a settled question. Human activity is causing climate change."

But Carlson pushed for Nye to declare "what degree" humans are causing an increased rate in climate change. "To a degree that it's a very serious problem in the next few decades."

"But, but, but, stop, stop, stop," Carlson stuttered, then demanded a more precise answer.

“So the word degree is a word you chose, but the speed of climate change is happening is caused by humans," Nye said. "Instead of happening on time scales of millions of years or let's say 15,000 years, it's happening on the time scale of decades and now years."

Carlson interrupted again: “But hold on - to what extent is human activity responsible for speeding that up? Please be more precise.”

Still not precise enough for Carlson, who wanted Nye to pin point exactly when an ice age would have occurred if human activity did not impact the earth's climate. Nye said that's not relevant and based on his baffled facial expression, we're assuming not even possible to determine. Carlson eventually grew frustrated with his guest and just flat out stated the message he was hoping his audience would pick up from his line of questioning.

“I'm merely calling into question your claim that all of this is settled, that we know precisely what is happening and why, and that anyone who asks pointed questions about it is a denier and ought to be imprisoned or shouted off the streets.”

After Carlson grew tired of more scientific answers from "The Science Guy" he invited on his program to talk about science, the Fox News personality lost his cool and concluded: "So much of this you don't know. You pretend to know, but you don't know and you bully people who ask you questions. I'm open minded. You are not."

Watch the video below to see just how open minded Carlson is.