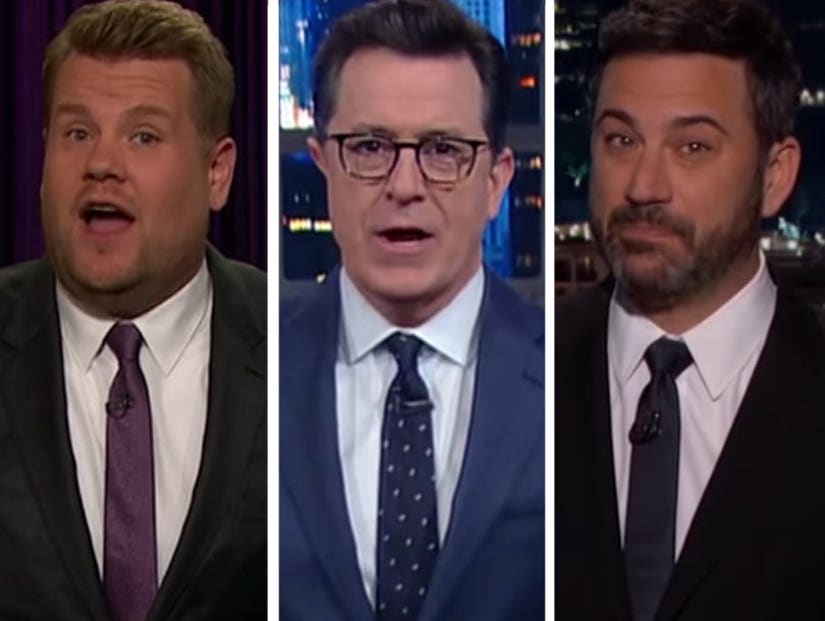 Trump and the GOP finally released their long-awaited healthcare bill to repeal and replace Obamacare on Tuesday, and late-night TV hosts had a field day with it.

Spicer claimed Obamacare was “jammed down everybody's throat" and that the GOP plan "allows for more competition, more people to enter it."

Boasting about the 123-page bill, Spicer said, “Look at the size. This is the Democrats. This is us.”

Kimmel spoofed a commercial for the American Health Care Act, mocking Congressman Jason Chaffetz's interview Tuesday morning with CNN that was met with an avalanche of backlash on the Internet.

“Americans have choices, and they've got to make a choice, and so maybe rather than getting that new iPhone that they just love and they want to go spend hundreds of dollars on that, maybe they should invest it in their own healthcare. They've got to make those decisions themselves," the staunch Utah conservative said.

“Well, it's finally here,” “Late Show” host Stephen Colbert said Tuesday in his opening monologue. “After six years of trying, last night the Republicans finally unveiled their healthcare plan. Then, out of force of habit, they voted to repeal it.”

Colbert pointed out what parts of Obamacare the new plan intends to retain: Kids staying on parents' healthcare plans until they're 26, no discriminating against pre-existing health conditions and “grandma will still be murdered by death panels while Nancy Pelosi cackles from her sky box.”

“Oh, there's one other thing they're keeping from Obamacare,” he added. “Nobody likes it. Conservatives are calling it 'Obamacare Lite,' – great taste, less coverage.”

“This bill gets rid of one of the signature aspects of Obamacare: the individual mandates. Republicans only wanted to get rid of it because they thought 'Individual Man Date' was a gay reality-TV show, which I'd actually like to see.”

Corden said the plan was already causing a lot of controversy, and he, too, took a jab at Jason Chaffetz's comments to CNN regarding low-income Americans needing to choose between healthcare and buying an iPhone.

“That's right," Corden said, "Chaffetz is saying poor people need to choose between healthcare or a phone. And just like a Samsung Galaxy 7, that comment blew up in his face.”

“Did I hear correctly? Is he saying health insurance costs the same as a phone? Hey, Jason, a phone isn't supposed to literally cost you an arm and a leg, OK? I mean, his comment was cold. Even Siri was like, 'Are you not a human being?'”