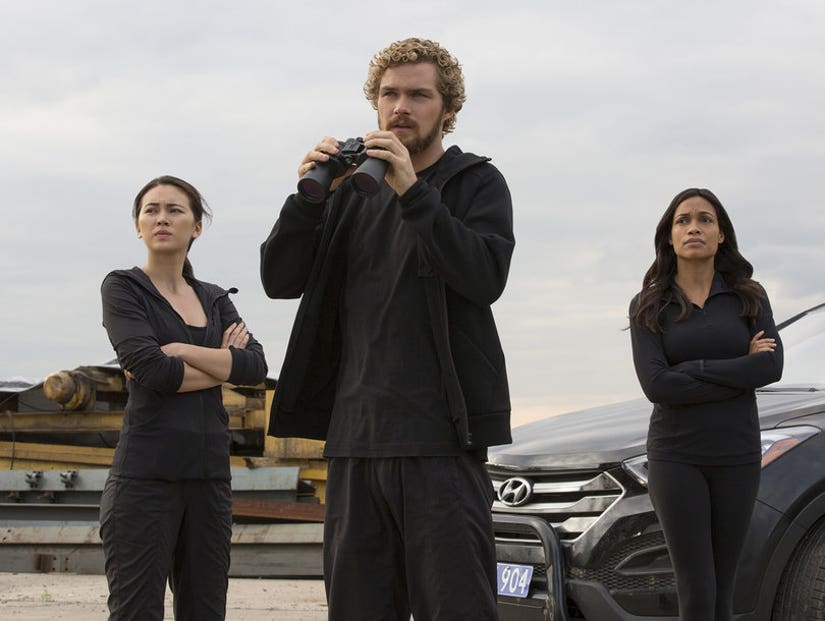 More than a week before its premiere on Netflix, Marvel's new Iron Fist series is mired in a Twitter debate about diversity - and a string of scathing reviews has only made things worse.

Iron Fist stars Finn Jones as billionaire Danny Rand, who is lost in a plane crash in the Himalayas and trained in mystical, vaguely-Asian martial arts. He makes his way home to New York to reclaim his family legacy and battle super-villains, and will eventually join Marvel's Daredevil, Jessica Jones and Luke Cage in The Defenders, Netflix's version of the Avengers franchise.

The first season debuts on Netflix on March 17 - but many critics who have previewed the first six episodes find Iron Fist a dull and disappointing addition to the Marvel lineup.

Daniel Fienberg of the Hollywood Reporter says that "Marvel and Netflix have their first big misstep" after the groundbreaking success of Daredevil, Jessica Jones and Luke Cage: "Iron Fist feels like a step backward on every level, a major disappointment that already suffers from storytelling issues through the first six episodes... [It] would probably be mercifully skippable in its entirety if it weren't the bridge into the long-awaited Defenders crossover series."

Maureen Ryan from Variety says, "Not one element of this plodding piece works. The action scenes lack spark, snap, and originality. None of the flat, by-the-numbers characters makes any lasting impression. And as origin stories go, the tale of Danny Rand (Finn Jones), at least as rendered by this creative team, is about as exciting as a slice of Velveeta cheese left out in the sun too long."

These reviews have sparked a wave of schadenfreude from many Marvel fans on Twitter, who have been criticizing the company for not casting an Asian-American actor as Danny Rand.

While the original comic book character is white, these fans spent the last year pressuring Marvel with an #AAIronFist campaign to race-bend the character for the sake of diversity. Marvel previously made a similar move by casting Samuel L. Jackson as The Avengers' originally-white Nick Fury, and DC recently made waves by casting Polynesian-American actor Jason Momoa as Aquaman.

Disappointed in Finn Jones' casting, these fans are now downright gleeful to see Iron Fist stumble right out of the gate.

Please, Hollywood, PLEASE learn that white dudes who know nothing are boring ragtag heroes! We all know like fifty of them!!

bruhhhh iron fist hasn't even premiered yet and all the reviews i've read have dragged it to hell and back BLESS pic.twitter.com/EF3MIUqliK

Meanwhile, Finn Jones temporarily deleted his Twitter account after a constant stream of critics accused him of "whitewashing" and "cultural appropriation." These critics were less than impressed when Finn recently retweeted a speech from Star Wars actor Riz Ahmed stressing the importance of diversity and representation.

representation is important. and here's why. https://t.co/w4rVuPtyrH

Jones later responded to an Asian critic, "Please don't make assumptions on our show before you have seen it. The characterization of Danny Rand may have remained true to its source material but our show incorporates and celebrates actors from all different backgrounds. I will go as far to say that it may be one of the most diverse shows out of the three."

Jones explained his decision to leave Twitter in a statement, though he has since restored his account with no further comment on the matter so far.

"My original intention was to amplify a speech made by Riz Ahmed at the House of Commons. It was a very articulate and important speech on representation that I wholly agreed with. After posting I was inundated by people accusing me of not being allowed to share his voice based on an assumption that our show is going to play into the problems of racial inequality on screen. I engaged politely, diplomatically and attempted to bridge the divide. I'm currently in the middle of filming and I need to stay focused on bringing to life this character without judgment, so I decided to remove myself from twitter for the time being."