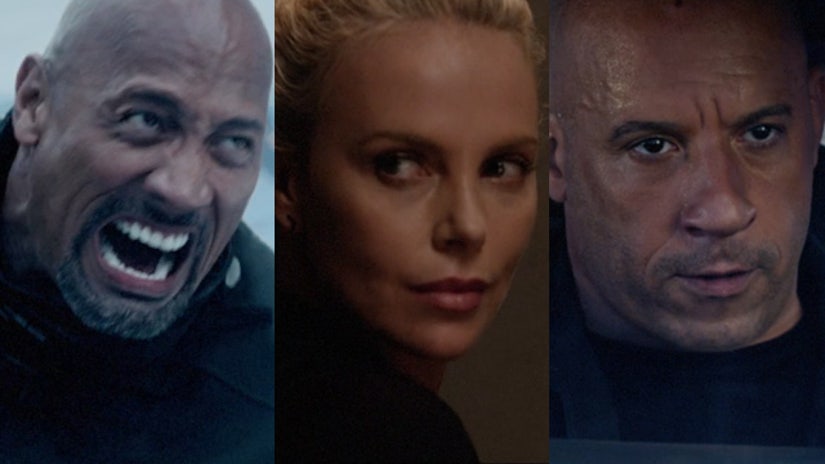 How do you one-up a franchise that's already had tanks, cars flying from skyscraper to skyscraper, and even a drone chase? Enter Charlize Theron, submarines and torpedoes.

Universal Pictures just released a three-minute-long look at "The Fate of the Furious," the first "Fast and the Furious" movie to be shot without Paul Walker. The late actor and on-screen wife Jordana Brewster pop up in a photo in the trailer, but that's it.

"This crew is about family, but the game has changed now. Dominic Toretto just went rogue," Dwayne "The Rock" Johnson explains, setting the scene for a film where the rest of the gang faces off against one of their own.

The trailer gives Theron's bad guy, Cipher, the spotlight as well. "No one's ready for this," she says menacingly. "There's thousands of cars in this city and now, they're all mine."

"Cipher is what you would describe as a master hacker with the ability to hack into anything," director F. Gary Gray told EW of her character. "She takes control over a thousand cars in Manhattan, and uses them as weapons." And yes, there's more than a glimpse of that happening in the video above.

The sneak peek also includes shots of the aforementioned sub and torpedo attack, The Rock joining forces with Jason Statham's "tea and crumpets-eating criminal" and, naturally, lots and lots of cars doing things they shouldn't be doing.

See more: Here's Why Nicole Kidman Was Clapping Like The Grinch at the Oscars

"The Fate of the Furious" hits theaters April 14. Check out the official synopsis below:

Now that Dom and Letty are on their honeymoon and Brian and Mia have retired from the game—and the rest of the crew has been exonerated—the globetrotting team has found a semblance of a normal life. But when a mysterious woman (Oscar® winner Charlize Theron) seduces Dom into the world of crime he can't seem to escape and a betrayal of those closest to him, they will face trials that will test them as never before.

From the shores of Cuba and the streets of New York City to the icy plains off the arctic Barents Sea, our elite force will crisscross the globe to stop an anarchist from unleashing chaos on the world's stage…and to bring home the man who made them a family.