"It's International Women's Day and Donald Trump marked the occasion by not inappropriately grabbing a woman for 24 hours. He calls it 'Lent, except harder,'" the "Daily Show" host joked Wednesday night before introducing Wolf for a segment called "Ivanka Trump's Fake Feminism."

"Ivanka's been silent on so many women's issues like healthcare, domestic abuse, reproductive rights," Wolf said. "Before you put too much hope in Ivanka, remember: She promotes a brand of feminism that makes her rich by exploiting the very people she's claiming to help. That's not being a feminist. That's being a Trump."

Wondering why Ivanka is even hailed as a feminist icon, Noah admitted that her "woman-friendly" policies actually benefit very few women and joked that it could be a good thing that there's a woman in the White House.

Wolf disagreed and discussed Ivanka's perversion of female equality. "Have a husband, have children, dress right, don't be poor and don't get mad when you're harassed at work," Wolf said. "There's a huge problem with that. She's not trying to change the patriarchy, she's telling women how to silently slide into it. Like a DM."

See more: Why Marvel's 'Iron Fist' Is Being Destroyed by Social Justice Warriors and Critics

Citing a quote (below) about sexual harassment from Ivanka's book, "The Trump Card: Playing to Win in Work and Life," Wolf said that elitism was the first daughter's brand. 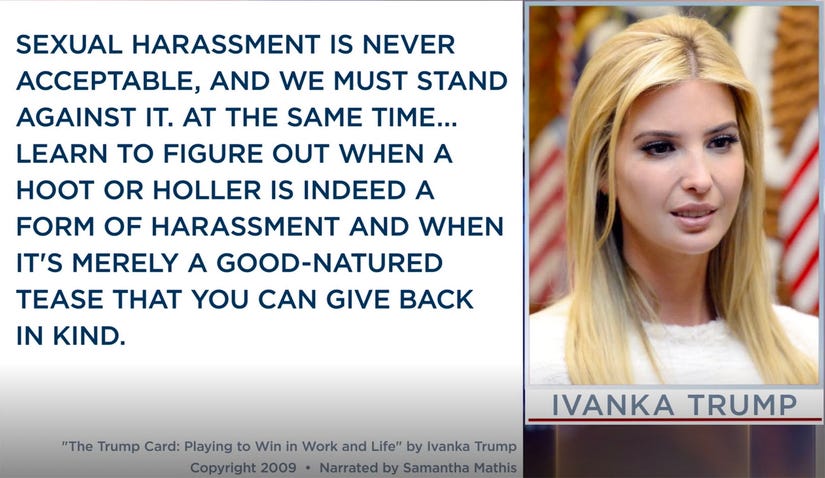 "That's her brand," Wolf said. "It always has been. 'I'm successful and powerful. How can you be like me? Buy my handbag!'" Wolf said about the first daughter's interpretation of feminism.

"This isn't feminism, it's 'women be shopping,'" Wolf said. "And look, I'm not faulting her for making a buck off women. But let's all stop pretending that it's anything more than that. Because whether it's her brand or her policies, it's designed with one type of woman in mind: Ivanka's feminism is the LuLuLemon model -- it's for rich, white women and you can see right through it."