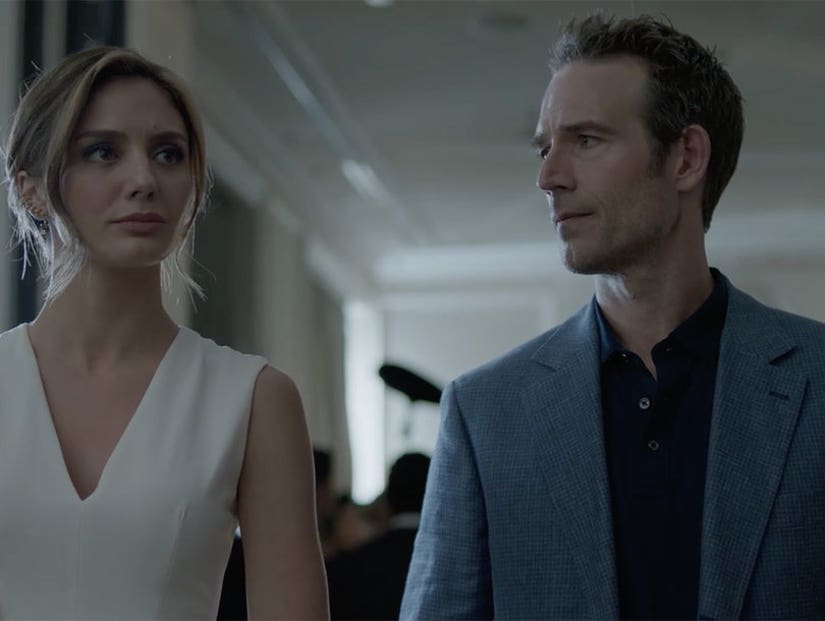 How has life changed for Christine Evangelista since the premiere of “The Arrangement”?

“It hasn't,” the star of the new E! scripted series told TooFab's Bernie Zilio. “I'm sitting here drinking an iced coffee in stretchy pants in some coffee shop down the block from my workout studio. I'm just doing my thing.”

She's presented a $10 million contract to marry the actor and abide by all the rules on conditions attached to doing so set in place by his life mentor Terence, played by Michael Vartan.

It's quite the interesting (and familiar?) plot. Here's what the star had to say about Episode 2, which airs this Sunday, and all the behind-the-scenes aspects of the life of an actor.

Tell me how the role came about. The audition? The call back? Did you have a screen test with Josh before being offered the role?

Josh was already cast a couple weeks before I think I even auditioned for it, and I think it was really, really important for them that we have the chemistry. We read together, and I thought it was great. He was wonderful. I remember one of the producers asked me like right after the audition to take a photo side-by-side with Josh, which is an unusual request. I think he just wanted to see how we look together, how we interacted, I just remembered that.

So anyway, I got a call that night from my agent, who was like, "Hey, they loved your audition, but the scene that you read with Josh was kind of a dramatic scene," and I think one of them was the audition scene that Megan has in the pilot when she first meets Kyle. And then there was another scene, like, "They really want to see you be funny and charming and whatever." And they were like could you go in tomorrow, they'll read you in New York and do the rap scene? So then I auditioned with the rap, I came up with a beat and everything, and a couple days later I found out I got the part. But it was definitely a long process comparatively to other jobs that I've gotten.

In Sunday's episode, you see Megan start to realize her life is being controlled by Terence. Is she already starting to have regrets?

This episode is great in the sense that it's definitely the most romantic out of all of them, this budding romance. He takes her somewhere that's literally the most romantic place on the face of the planet, and she sees like a glimpse into this Hollywood life, but it's quickly sort of daunted by Terence's hand in everything and the role he plays in everything and how he sort of pops up unexpectedly to control a situation. I think it becomes overbearing and she starts to realize just how much control is actually in his life.

How would you handle being constantly watched and monitored the way Kyle's mentor monitors Megan?

It's totally bizarre and probably the reason I wouldn't be in this situation in the first place. I don't think that would be comfortable, really, for anyone to be an adult, to want some sort of privacy or some normalcy. And I think that's a lot to ask and it's something that Megan doesn't really realize before she signs the contract. I wouldn't like it at all.

Would you marry someone you just met for $10 million?

Are you and your character similar?

Have you witnessed any contract marriages firsthand?

I haven't witnessed it, no, but as I've been answering questions and doing interviews, people have come forth to tell me, 'You know so and so,' or 'They have two friends that were set up to promote something.' I think there's a lot of strategy involved, like not just in recent times, but especially back in the day when you think about when big studios had contracted players and you were assigned to a studio lot. Like, of course there was some kind of pairing up to promote something. I know that happens.

How sick are you of being asked about the Tom Cruise-Scientology comparisons? What are your thoughts for those who insist it's loosely based on his life?

I think that it's totally normal for people to make comparisons. And they may think they know what the show's about, but I'm very confident in the next coming weeks as the show progresses that you see these are characters with their own history and their own stories, and it's not based on anyone in particular.

Your on-screen chemistry with Josh is great. Tell me about your off-screen dynamic with him.

He's so great, and I really mean that. He's such a professional. He's funny and he's great to work alongside with. I do think we have a really wonderful working chemistry, even from the beginning. We met in the same way that Megan and Kyle do, and our working relationship is starting and you know you have that first day of work awkwardness, which I think Megan and Kyle also have. And like the beginning of the relationship awkwardness, so I think it was really organic what was happening on screen as it was happening off screen. I mean, we're not romantically involved with each other, but he's the perfect Kyle West. I couldn't have asked for a better partner on screen.

Some people have linked your on-screen chemistry to Dakota Johnson and Jamie Dornan's in “Fifty Shades,” which ironically premiered on E! before the premiere of “The Arrangement.” What're your thoughts on that?

I think that they're both in like this fantasy world. Like Megan's life is sort of changed immediately when she meets this guy, and I feel like he comes from a world of excess and it's like this very romantic dreamlike scenario, but they all have some sort of underlying issue. Like I can see the comparison, but I don't really know that much about 'Fifty Shades of Grey' other than what I just said. I haven't read the books or watched the movie, but I know what it's about, so I can see the comparisons.

You and Josh have tons of steamy scenes together. What's it like filming those?

Very awkward. And I think there are so many racy scenes that there just reaches a point where you're OK. Episode 3 is titled 'Nudity Clause,' and I'm sure you could imagine why, so there just reaches some point in doing this that it just becomes like a switch and you just go for it.

But I remember in the pilot episode, the first scene that Josh and I ever shot together on camera was the scene when Megan pulls up to Kyle's house in her car and she gets out on his driveway and he spins her around and they have like a kiss, and that was the first scene that Josh and I shot together. I was so nervous we had to kiss and I think it was 6 o'clock in the morning and I think I had like 10 pieces of gum in my mouth and It was just really strange. I was like, "Uh is this as awkward for you as it is for me." But everyone else behind the monitor was like guys this looks great so you just go for it and you become those characters and you make it work. It did swallow a lot of gum that day.

A lot has happened in just the first episode. What can viewers expect from this Sunday's episode? What's coming up for your character that you're most excited for viewers to see?

You see how the relationship is tested and if it's tested and if it's done on purpose or not, and you see if Megan can withstand that and at what point does she break if she breaks and why. But you learn more from these characters in the next couple weeks – who they are, what they're hiding from. Everybody on the show has their own secret, and each character doesn't know about the other character's secret, and the audience is in on that, so I think that's a very exciting element. You see more of the behind-the-scenes of Hollywood, more of stories develop and what can make or break them.