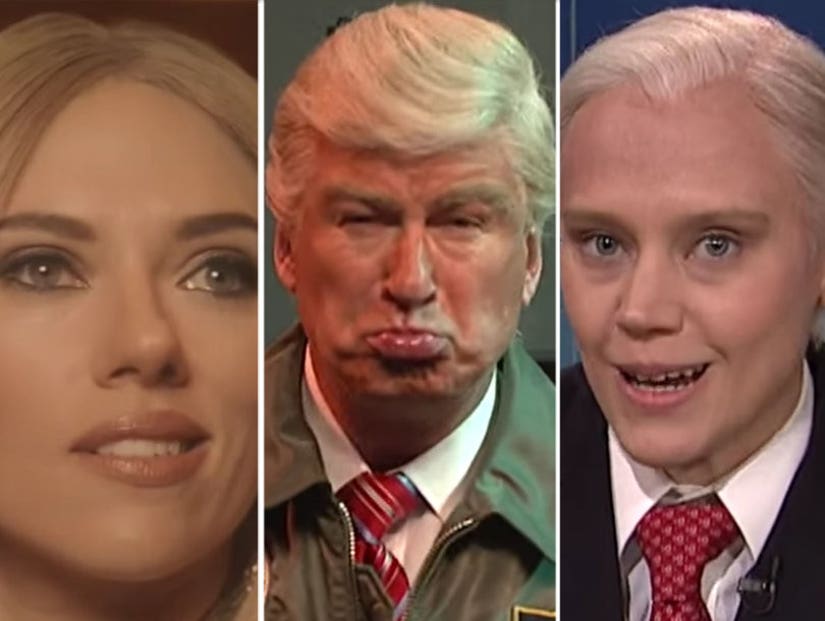 Scarlett Johansson hosted "Saturday Night Live," where her comedic chops plus the return of Alec Baldwin's Donald Trump and Kate McKinnon's Jeff Sessions made the night a triple-threat in comedy.

Here are the four funniest moments from "SNL."

A faux ad for perfume "Complicit" shows Johansson as the first daughter as a voiceover reads: "A fragrance for the woman who could stop all this. But won't"

"A feminist, an advocate, a champion for women," the commercial reads. "But, like, how?"

Ribbing her for her politics and her role in the White House, the voiceover pokes fun at Johansson's Ivanka for actually being Donald Trump in disguise and says that when she watches "Titanic," she probably think she's Kate Winslet's Rose ... but is really just Billy Zane.

"Al and I are actually great friends," McKinnon said, and detailed a time when they went whitewater rafting together. "He showed me 'Jew stuff,'" McKinnon said, while Moffat's Franken said: "We had lunch at a deli, Jeff."

Addressing Sessions' recusal, McKinnon explained: "I was all distracted. I was trying to evade these dastardly accusations of being a racist, which I'm not. Where I live, racism is simply part of the landscape."

Moffat's Franken asks, "And where do you live?"

Donald Trump Takes on the Aliens ... just not "that" kind

Alec Baldwin reprised his role as President Donald Trump on "SNL," giving a group of armed services men and women an inspirational speech the night before a big "alien" battle.

When bombs begin dropping and panic sets in, Baldwin referred to the aliens and said: "They've been coming here for hundreds of years," and pointed at cast member Leslie Jones, who was dressed as a servicewoman and said, "There's one!"

Johansson played a scientist who invented a device to translate animals' thoughts into English.

"Hi, I'm Max," the dog says after Johansson's character straps the apparatus to his head. "I like park and leash. And I like Trump. He's my man."

Max says: "There's no glitch. Donald Trump is our president. He carried the electoral college fair and square."

A visibly embarrassed Johansson tells Max and the other scientists and investors that he's a simply a dog and doesn't know what he's saying.

"Excuse me Helen, but yes I do," the dog responds. "It's that condescending attitude that made people want to vote for Trump in the first place."

Watch the skit in the video above and see what happens when somebody brings a gun to a dogfight.