Believe it or not, "Odd Couple" star Matthew Perry told Jimmy Kimmel on Wednesday that he beat up Canadian Prime Minister Justin Trudeau.

Of course, they were just kids.

Perry and Trudeau both attended school in Ottawa, where the alleged incident happened. Perry said a friend recently reminded him of what went down in grade school.

“I think he was excelling in a sport that we weren't, so it was pure jealousy," Perry said in the late-night interview (above). 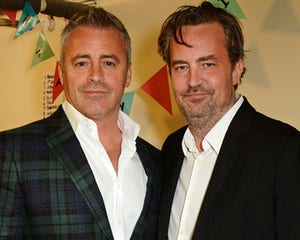 "His dad was the prime minster, but that's not why we beat him up. I think he was the only kid in school we could beat up," Perry said.

Perry, who most famously played Chandler Bing on "Friends," added that it's clear Trudeau rose above the childish behavior to become Prime Minister of Canada, alongside being an international heartthrob.

"I'm not bragging about this. This is terrible, I was a stupid kid," Perry said.