Donald Trump took the opportunity during Saturday night's interview with Fox's Jesse Watters to shred "leakers" within the government and called Rachel Maddow's tax report on the President "illegal."

"They are bad people," Trump said about Maddow's reporting of Trump's 2005 taxes on her show last week. "There is something wrong with them. They leaked them; it's illegal to do what they did."

"I always heard that a tax return was a very sacred kind of a thing," he said. "You don't leak them; you're not allowed to -- it's criminally offensive." 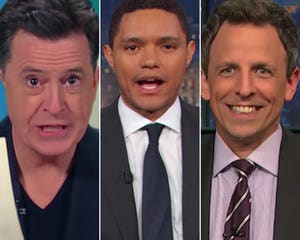 The President's rant resulted in targeting "Washington insiders" who are trying to hurt his presidency by leaking private and sensitive information.

"It's terrible what's going on in Washington," Trump said. "We have a certain establishment out there that's leaking. They don't respect the law and we have to change that.

Watch the rest of the interview in the video above.