Cohen posed a question from a fan about Brown during the show.

"What would you do if you were stuck in an elevator with Chris Brown," he asked Beckford.

"One of us is coming out alive and it's me," he responded. "I still don't got no respect for the dude, I feel bad for him. Drugs is a [censored]. I think he really needs to check himself for that. It's probably out of his control, but it is what it is."

The model and singer previously feuded in 2015 after Beckford posted a photo with Brown's ex, Karrueche Tran, in Las Vegas. At the time, Brown tweeted -- then deleted -- "Keep playing I'ma f--- ya baby momma and then whoop you child like he mine," but later apologized. 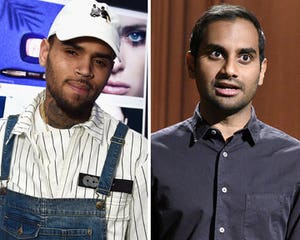 Beckford also bashed models who make it big on Instagram, explaining how their success is actually hurting those who have been in the game for years.

"I have no respect for them. A lot of us beat the streets of New York with our books. They just come on Instagram. They actually brought the money down, they kind of ruined it a little bit. Now they'll go get a lookalike for $4,500 instead of paying 6 figures for the real deal."