Trevor Noah theorized on who actually is the current president during Monday night's airing of "The Daily Show" and spoiler: It's not Donald Trump, it's actually Fox News.

"The reason Fox News is currently the president is because since Trump took office, Fox has been the source of much of the crazy shit he's said. If Trump's lies are the virus, Fox News is the sex monkey that started it all," Noah said during the show.

Noah also joked that aside from Golf Strippers Network, Fox News is the President's "favorite" channel. 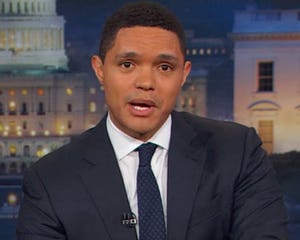 "Yes, since Fox got rid of the woman who was coming between them and Trump," Noah said, referring to Megyn Kelly, "they've since been on a long honeymoon with the president.

Noah added that the President has "been on Fox so much, he's almost been sexually assaulted by Roger Ailes."

The late-night host also revealed that Omarosa Manigault was to appear on Monday night's airing, but that she cancelled at the last minute. 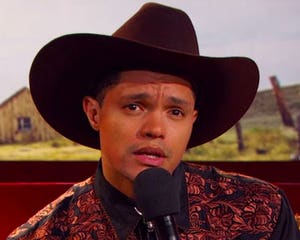 "We were supposed to be joined by senior Trump adviser Omarosa, who, of course, was here to promote her episode of 'Say Yes to the Dress," Noah said. "That is true, by the way. But, at the last minute, she bailed on us, and the reason she gave -- and this is true again -- is that the administration didn't want her interview on 'The Daily Show' to eclipse the news of the day."

Noah didn't understand her rationale because the news of the day was FBI Director's James Comey hearing on Capitol Hill.