Pennywise is back to haunt your nightmares.

Warner Bros. released the first official poster and trailer tease for "IT" on Tuesday -- before Wednesday's official trailer drop -- and it's already giving us the willies.

The quick promo video (above) for the Stephen King adaptation simply shows a camera weaving through a drain pipe as we hear the voices of the Losers Club. "I saw something," says one. "A clown," adds another. "Yeah, I saw him too," says a third, before we hear the villain's creepy laugh. 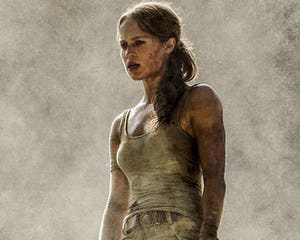 'Tomb Raider' Reboot: Alicia Vikander Gets Down and Dirty as Lara Croft (Photos)

The stinger: little Georgie saying, "We all float down here."

The poster for the film also shows Georgie in his rain slicker, as Pennywise holds up a red balloon to lure him away.

When children begin to disappear in the town of Derry, Maine, a group of young kids is faced with their biggest fears when they square off against an evil clown named Pennywise, whose history of murder and violence dates back for centuries.

"IT" hits theaters Sept. 8 this year.