Wanda Sykes didn't hold back on Tiffany Trump or her "d--k" father while appearing on "Conan" Thursday night.

The comedian continued, "She should get a mall cop. She should have a dude on a segway just following her ass around. Trump don't even like her. He never talks about her -- never." 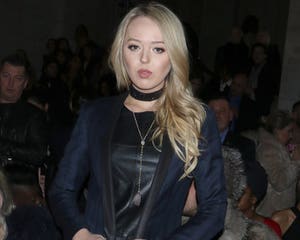 You Can't Sit With Us -- Tiffany Trump!

Sykes also said that the President is never going to change, and that he's just going to "be a d--k."

"Sweet Jesus," Sykes said when asked her thoughts on the President's antics. "Everyone's waiting for this moment for him to become presidential. They're like, 'You know, he has to learn to control his emotions, he has to learn to be measured,' but the man is 70 years old. Those are things that you teach kids. I'm teaching my seven-year-old those things. Trump is 70. He's not gonna learn that now. If he's a d--k, he's just gonna be a d--k, that's it."