"Trump said he won't throw out the first pitch," Leno said. "He's skipping the correspondents dinner. Is he that thin-skinned? You know, if this guy was any more of a p---y he could grab himself."

Turning his attention to the Clintons, Leno said, "After Anthony Weiner's last scandal, he actually called Bill Clinton to apologize. See, that's when you know your life has gone off the rails: when your sexual behavior offends Bill Clinton." 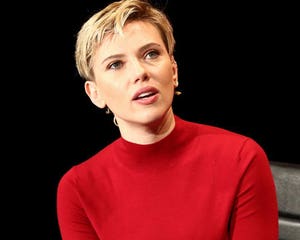 Why Scarlett Johansson Is 'Baffled' by Ivanka Trump

Here's what the veteran comedian had to say about the economy: "The only people jumping the White House fence are contractors trying to get trump to pay their bills. That's how bad the economy is. The economy is so bad, Kellogg's had to sell Tony the tiger to a Chinese zoo."

Then Fallon jumped in to get a jab in at Kendall Jenner's widely panned Pepsi commercial.

"The economy is so bad, Kendall Jenner just did a commercial for RC Cola," he joked.