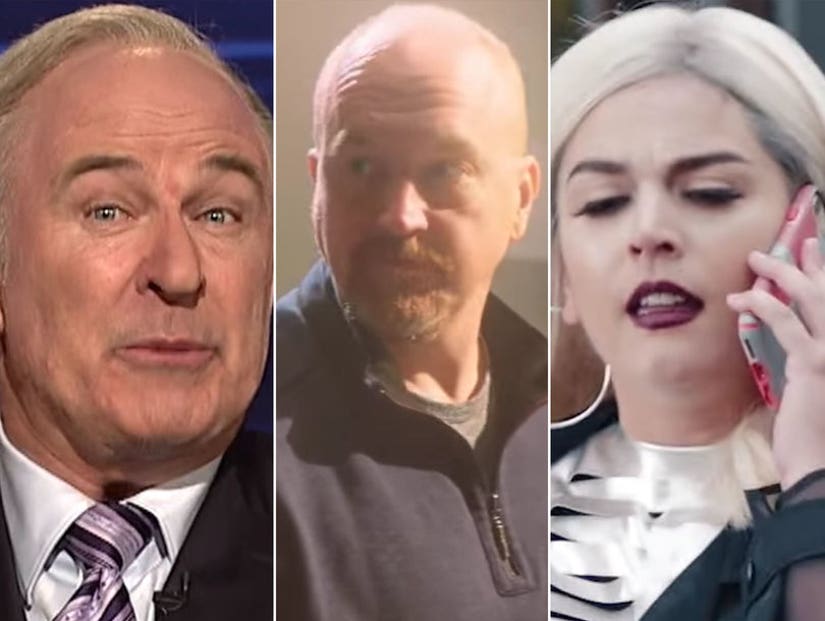 A host can make or break an episode of 'Saturday Night Live,' so the show was fortunate to be in the capable hands of comedian Louis C.K. this week, back for his fourth time. While his humor can be shocking, as he proved in his stand-up monologue, he's so amiable in everything he does, you can't help rooting for him ... even when he's nearly ruining a sketch as he also did tonight.

In this series, we will be breaking down every sketch in each episode of 'SNL' and ranking them from worst to first. We will then award the SNL MVP to the cast member who did the most that week to make the show successful. To be fair, we are excluding hosts from this honor, as they are expected to have the largest role in any given episode. In fact, if they don't, it's probably a sign that wasn't a very good host.

The end of the night is where things get weird. It's a testing ground for pitches that heard a lot of "I don' know..." in the writer's room but there were no better ideas. This sketch falls firmly into that category, tilting too far on the weird side and not enough funny. It's simply about Louis C.K.'s character loving sectional couches he made a commercial about his personal collection of them. It has some silly moments, and C.K. is always good at socially awkward and weird, but the material let him down here.

It disappoints me that Alec Baldwin's Donald Trump appearance at the top of the show was easily one of his weakest on the season. Luckily, he'll make up for it later in this list. The joke was that Trump's "red state" supporters will continue to support him even as he makes things harder on them, but the supporters were too passionless and it just fell flat. They needed to get worked up about what they were losing and then be equally worked up -- if not moreso -- about how they supported him anyway.

I hate to say it, but this sketch only ranks as high as it does because of C.K.'s terrible attempt at an accent and the fact it kept cracking him and Kate McKinnon up. Other than that, the joke was that these immigrants in 1913 were racist. And this was presented as a "performance piece" to high school kids on a tour. There's humor in the concept, but the writers just didn't find it.

This was an inevitable response from 'SNL,' after the massive backlash against the Kendall Jenner-led 'Black Lives Matter' commercial. Pepsi has already pulled it and apologized. Beck Bennett plays the director who gets told by several people minutes before they were set to film that the piece is tone-deaf and a bad idea. His nuanced performance is the only reason this piece scored as high as it did, because it didn't really have anything new to add to the conversation.

While still solid, this week's installment was not one of the best, and that's in part because they lacked for guests. McKinnon was the only one, as the woman who defaced the Jesus statue commenting on and adoring the awful Cristiano Ronaldo statue that made rounds this week. While the political stuff is funny, the best bits this week came at the end with the Yahoo! AOL merger "because no one wants to die alone," and McDonald's reviving the McManatee. Colin Jost and Michael Che are getting better at the banter, but looking back at previous hosting pairs, they lack a certain chemistry still.

This sketch also fell into the weird category, and is the first of tonight's sketches to feature that 'SNL' standby, the left turn into coo-coo-town at the end of a sketch. C.K. portrayed a middle-aged diner owner who asked one of the high school girls to her dance. It was purposefully uncomfortable, and only got more uncomfortable as his advances got more direct. It would have ranked higher but for the weird end where the girl (Cecily Strong) admitted she did it on purpose because she wanted to be a dominatrix, and he friends knew too. This didn't fit with what any of them said. Basically, the writers didn't have an ending so they went weird.

The musical numbers have been strong in the past few years, with the women of the cast really bringing their A-game in these pieces. This one featured Kenan Thompson in the lead, and wasn't quite as powerful, but it was a perfect concept for today's age. C.K. was the subject of the piece as Scott, a guy who "fixed the world" by sharing articles on Facebook and posting socially aware things. Basically. none of these people are doing anything to really change the world. but they sure like to feel important.

As is usually the case with stand-up comics as hosts, the monologue was basically a piece of their stand-up set. C.K. freaked out the audience a bit by saying he wanted to have sex with a goat, but this is what he does so well: alarming material in such a disarming way you're still charmed and delighted by him. His stronger material came when he described the awful motels he used to stay at and how uncomfortably he's adjusting to five-star treatment.

Bobby Moynihan turned in a multi-layered performance as a birthday clown invited to the house of Louis C.K.'s character. There's no children there and just C.K., so it's very weird. The pre-filmed bit has the same tone as an episode of 'Louie,' and that's a very good thing. Moynihan is clearly uncomfortable to be there, and C.K. is subdued and awkwardly weird. The ending was an unfortunately cliche, but I can overlook it because the tone of the piece was so perfect throughout.

This absolutely should not have worked, but it absolutely did. The premise is so stupid. Louis C.K. is a prosecutor with gorgeous eyelashes. That's it. But it worked beautifully because everyone was so enamored with them, and C.K. really dove into the character, batting and widening his eyes in a very alluring way. This sketch is proof that execution is often more important than the initial idea. The right players with the right material can even take a ridiculous idea like this and sell it.

Alec Baldwin dropped another impression on us with a surprise turn as Bill O'Reilly in this very sharp and funny sketch. He had the mannerisms down pat and danced around the current O'Reilly sexual harassment charges scandal incredibly well. Then, the sketch doubled down by having O'Reilly interview Trump via video, so it was Baldwin talking to Baldwin, and it was seamless. A master performer in two masterful performances in one single sketch. O'Reilly was creepy to Strong's correspondent and completely tone-deaf and this Trump was much stronger and funnier than his appearance in the cold open.

Right out of the gate, I have to cheat and give this week's MVP to Alec Baldwin. His double-bill performance as Bill O'Reilly and Trump was the highlight of the night, and continued an all-star season for the regular featured performer of this season. That sketch is the one to submit for Emmy consideration, and is easily his strongest outing of the year to date.