The fast food giant called out Bradley Cooper on Friday after the actor and Ellen DeGeneres filmed a PSA aimed at Carter Wilkerson, the Reno, Nevada teenager who's on a mission to get a free year of Wendy's chicken nuggets for the small price of 18 million retweets.

Wilkerson is already at 2.9 million, honing in on Ellen's territory. DeGeneres' infamous Oscar selfie is currently the most retweeted photo of all time with 3.3 million shares.

HELP ME PLEASE. A MAN NEEDS HIS NUGGS pic.twitter.com/4SrfHmEMo3

"If you think I'm going to lose that record to some chicken nugget kid, you are out of your cluckin' mind," she said. "If you're going to retweet nugget kid, retweet my tweet, too!"

In the PSA, Cooper joins Ellen to say, "We earned this title and we are not going to lose it now."

"I was sitting on Meryl Streep's lap for an uncomfortably long time," Ellen added. 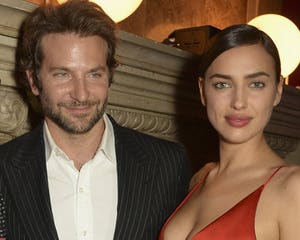 Wendy's, whose Twitter page is known for shelling out some hilarious replies, caught the video and let Wilkerson know he shouldn't be frazzled.

Bradley Cooper? He doesn't even have a Twitter. Don't let him keep @carterjwm from his nuggs. #NuggsForCarter https://t.co/RkG6kARNEw

Wendy's has also vowed to donate $100k to the Dave Thomas Foundation for Adoption if and when Wilkerson beats Ellen's record. The foundation is dedicated to finding homes for children in foster care.