Sonja Morgan from "Real Housewives of New York" revealed that she dated Jack Nicholson -- or at least had a sloppy hookup with him one time -- during a segment on Wednesday night's "Watch What Happens Live."

"He's so much fun," Morgan said when pressed by Andy Cohen whether or not she dated Nicholson. "Who hasn't? Don't forget how old I am, and don't forget those days before cell phones, with the old answering machines."

"That's something to be proud of!" delighted co-guest Michael Rapaport said. "That's an American treasure, man!" 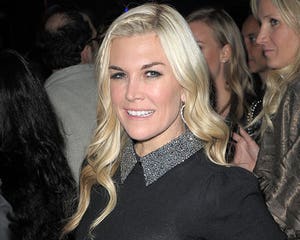 'RHONY's' Bethenny Frankel and the Ladies Dish on Sonja Morgan's New Roomie Tinsley Mortimer -- But Why Is Ramona Irked?

When Cohen coerced Morgan into clarifying whether "dating" meant more than one night with the Hollywood legend, she said, "Nobody nails down Nicholson" and added that their encounter was "one big sloppy mess."

"We're friends," she said. "I went to his wedding, his [ex-wife's] Ivana's wedding, and friends separately. Friends of the family."