James Corden and Kevin James were just looking to cheer on their kids at a soccer game until things got a little weird.

The duo went head to head in an epic "angry soccer dads" karaoke battle on Tuesday's "The Late Late Show" attempting to one-up each other to prove who was the dad could cheer on their kid better.

The two went back and fourth making fun of each other's kids, each other, and later pulled out giant signs to ridiculously root for their sons. James dressed up as an actual cheerleader, while Corden challenged him in a one man marching band outfit. 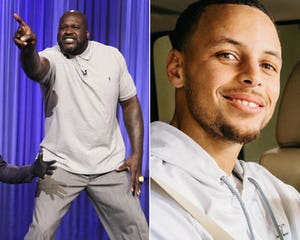 Though their battle started off slow, it turned into a full-on spectacle that even included an appearance from referee Adam Sandler.

The entire crew (which included a a live band and a cheerleader squad) jammed out to "Simply the Best."

Watch for Sandler's hilarious cameo toward the end of the skit.