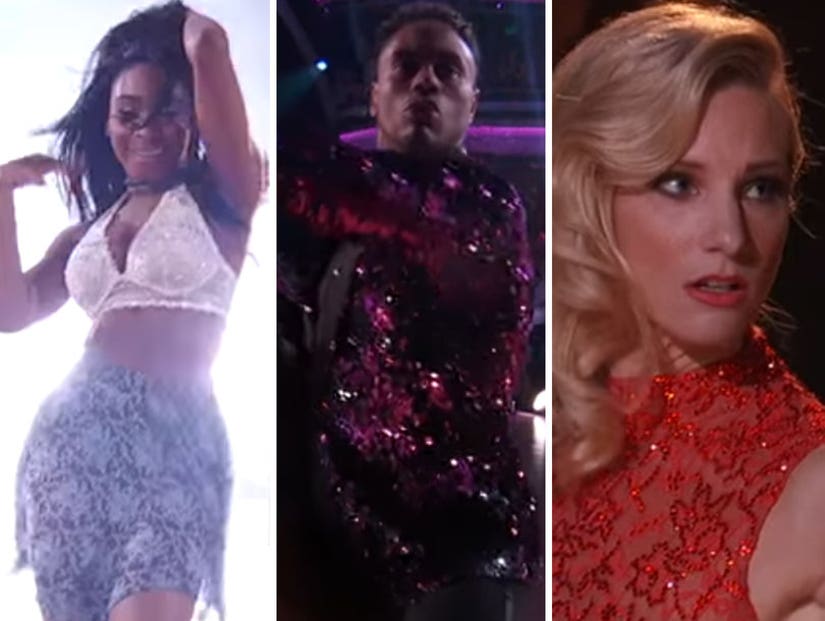 I'm back! TooFab's officially unofficial "Fifth Judge" is ready for a sixth week of celebrities shaking their money makers on the dance floor. The theme for the week was Boy Bands vs. Girl Groups, which should have given Normani Kordei a bit of an advantage ... seeing how she's in one! It did bring the biggest shocker of the season, and perhaps the past several seasons, along with our first perfect score.

In the spirit of the evening, and with Julianne Hough off, the show brought in Season 21 runner-up and a guy who knows a bit about this type of music, Backstreet Boys' Nick Carther. Fair warning, since I'm safe at home, I'm probably going to be a little harsher than my colleagues Carrie Ann Inaba, Nick Carter, Len Goodman, and Bruno Tolioni. But I might be nicer, too. Maybe.

Olympic gymnast Simone Biles & Sasha Farber tried to bring the "sexy" out in the young athlete who spent more time training than dating so far in her life. But a samba is a sexy dance, and Beyonce oozes sex. Right off the bat, it was clear she missed the mark entirely. She came out like a bubblegum Disney pop artist for her opening solo. The performance was more peppy than sultry and every mark she hit just looked too sharp and wrong, and even a little off the beat. I suspect Sasha choreographed it to hit hard, but it wasn't quite that either. She's still a technically strong dancer who can handle any steps, but I felt the performance was a little lacking.

Bull-rider Bonner Bolton & Sharna Burgess faced off in front of her former dance partner in Carter. Once again, Bonner proved uncomfortably stiff through much of the dance, and especially in the opening moments. He did better on the partnering work, but much of that credit goes to the powerful performance of Sharna. You could see that he felt more confident with her in his arms, but he still struggled to really find his performance. And, I'm sorry, it was hard to overlook his weakness in the early portions.

Olympic figure skater Nancy Kerrigan & Artem Chigvintsev felt some friction leading into this dance,as Nancy's incessant perfection got in the way during rehearsals. And yet, once the music started, her attitude was again perfection. That said, this process of hers creates a ton of stress for her, and now Artem. The dance itself was a little lacking in strength and power and balance, as if Nancy was tired or over-stressed. Maybe she was concentrating too much on attitude or something. But she was much more confident and solid in her performance last week. You could see on her face that she knew it, too. While it wasn't perfect, it was still quite good.

'The Bachelor' Nick Viall & Peta Murgatroyd had their work cut out for them getting Nick up to snuff for the speedy and bouncy jive. He's been heavy-footed, and was filled with self-doubt coming into the performance. His energy was up from the usual, but still not where it needed to be. He still can't get those weights off his ankles, and wasn't big enough with his arms, or quick enough with his flicks. But this was a dance I think he could get quite god at were he give some more time with it. It lacked polish, but the technical steps were there.

Fifth Harmony member Normani Kordei & Valentin Chmerkovskiy channeled her childhood dancing to one of her idol groups. Finally, on the night, we had a confident dancer who brought both performance and proper form. Normani nailed this salsa like she'd been dancing them with years, and you could tellthat she was feeling the song. The lifts were solidly nailed and the performance was nearly flawless. It was a pop infused salsa with amazing energy and performance. For the total package of what it takes to win this show, I think Normani is the one to beat.

(Salsa)"When I Grow Up," The Pussycat Dolls

Former Cubs catcher David Ross & Lindsay Arnold bonded in rehearsals over his frustration at the challenges inherent in the Argentine tango. They made an odd choice to open the dance partially obscured behind a curtain. And while David knew the steps, his posture wasn't quite right, and his footwork was a little sloppy. The lift was labored, but kudos for the effort of getting through it and never giving up. You could clearly see him working throughout, but Lindsay properly didn't go easy on him. He is a capable performer and this is how he can get better. But he does need to get better.

(Argentine tango)*"I Want You Back," NSYNC**

NFL running back Rashad Jennings & Emma Slater shared both rehearsal and football training this week, building their relationship. The pair sahre a wonderful connection that shows through in their performances, and made for a very striking tango. Rashad had a perfect hold and showed strength throughout -- maybe a bit too much at times -- as well as a consistent professional demeanor. He was a tad heavy on his feet during the key footwork, but mostly showed a lovely grace and strength across the dance floor. He continues to impress as a non-dancer dancing like a pro.

(Tango)"Reach Out I'll Be There," The Four Tops

'Glee' star Heather Morris & Maksim Chmerkovskiy went into the week with Maks determined to get Heather her first ten. He pushed for the passion of the rumba, pulling out as much sexy as he could. Once the number started, it was genuine perfection. Heather was every bit of passion we needed, and you could tell Maks was eager to get back on the dance floor. What a powerhouse couple. As good as Alan has been in the past few weeks, this elevated Heather's performance to a new level ... and she was already one of the leaders. There's nothing to say. And poor Alan got a drink thrown on him! The judges were absolutely right to dub it the first flawless dance of the season.

Bonner, David, Nick & Rashad had to perform 20 seconds alone without their female partners as an extra challenge for the Team Boy Band performance. The performance was a love letter to boy bands, with the guys clearing having fun channeling their inner NKOTB during that solo bit. There was a lot of fan service and fun, but it wasn't particularly challenging or impressive in actual dancing from the guys. The choreography was pretty straightorward throughout, leaving a performance that wasn't bad but also wasn't memorable.

(Freestyle)"Dancing Machine," The Jackson 5 / "You Got It (The Right Stuff)," New Kids on the Block / "Best Song Ever," One Direction"

Heather, Nancy, Normani & Simone sat atop the leader board after the last week, but still found out they were in danger of elimination right before performing. Team Girl Group was impeccable during the middle portion of the dance, which spotlighted their partnering one on one. For the Fifth Harmony bit, the last portion was technically solid, but lost some of the energy and pizzazz of the beginning. It was a fun performance, despite some technical difficulties toward the end. A better performance than Team Boy Band, which just goes to show how important voting is. All four of these women are very strong dancers, but one of them was headed home.

Despite being the stronger group of the night, the women were in danger on the night, so it was bonkers going into the elimination. I'll go ahead and name names. Bonner, Nick and David should probably all go home before any of these girls get sent home.

But then reality went right out the window, as Heather & Maks were eliminated just three performances after earning the first perfect score of the season. How is this happening? They were at the middle of the pack last week (scoring lowest among girls), but had the highest score tonight. How crazy is it to follow up perfection with elimination?

This is why the lights went out. Nobody wanted to see this. Heather must have really failed to connect with fans, or her fans just got complacent. Get out there and vote or another shock like this could be waiting in the wings.