The "Daily Show" host pointed out a number of times the President bragged on the campaign trail about what he'd be able to accomplish in his first 100 days in office, which is a stark contrast to Trump's latest remarks that completely disregard the 100-day scorecard as an "artificial barrier."

"Donald Trump can't suddenly say that 100 days is an arbitrary number because he ran on the 100 days during the campaign," Noah said in the Monday night segment (above), complaining the President had "moved the goal post."

"You don't get to just disregard the number because you don't like the current results," Noah said before referencing Hillary Clinton's lead in the popular vote. "Because if most voters in America got to choose the number they preferred, well, you wouldn't be in the White House, Donald." 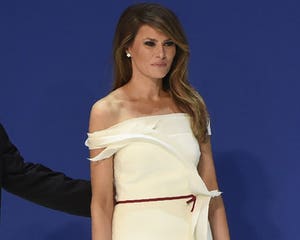 "If you're a Trump supporter you may be saying, 'Well at least he tried. Doesn't that count for something?' No, it doesn't. It really doesn't," Noah said. "Boy Scouts don't earn badges for trying to help an old lady across the street. They either help her across or she gets crushed by an 18-wheeler. That's how it works."

Noting that Trump seems like an over-promiser and an under-deliverer, Noah added, "I bet Trump is one of those people who makes too many New Year's resolutions, you know. 'January first, I start my diet, sign up for pilates, I finally face my biggest fear: making eye contact with my son Eric. That guy gives me the creeps.'"