Although the Oscar-winning actress turned down Jacob Staudenmaier's request, she was apparently impressed enough by his ambition to send a corsage, boutonniere and a hand-written letter.

“Jacob, a little something for you and your lucky date tomorrow. Have a great time! Much love, Emma Stone," she wrote in a note posted on Twitter by Jacob's mother, according to The Daily Mail, which first spotted the tweet.

During an appearance on "Good Morning America" in April, the teenager said his celebrity crush sent him a letter after seeing the viral video (above). 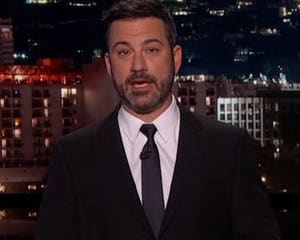 Jimmy Kimmel Argues 'Celebrity Promposals' Are 'Terrible,' 'Creepy' and Must 'Be Stopped' (Video)

“Jacob, thanks for making the greatest proposal I have ever received,” Stone wrote. “I can't tell you what an honor that was and how much I smiled through that entire beautifully orchestrated video. I'm in London working, but I hope you have the best time at prom, and I'm grateful you thought of me. Thank you. P.S. I do see Gosling around the eyes. Love, Emma.”

Instead, Staudenmaier settled for fellow student Caitlin Teefy (below).