One unsuspecting teenager got the surprise of her high school life on Thursday night, when a boy from her class staged a "Frozen"-themed promosal with the help of Kristen Bell.

Bell was the guest host for the evening and since she was in charge, the actress was very excited to "do whatever I want." Her goal: "to give away some prizes, like a blond Oprah."

She then set up a game with two random audience members, a pair of teens named Zoe Brown and Sara Patina. The two were sent out into the streets to play a game called "The Fast and the Frozenest," where they went head-to-head to try and be the first to find someone dressed as Kristof from "Frozen" among the many characters on Hollywood Blvd. 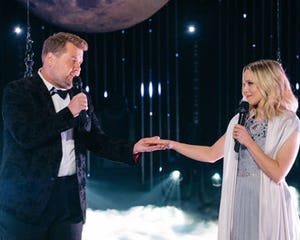 Bell's secret: "It's not a game. Sara's high school prom is coming up in a couple weeks and one of her classmates, a boy named Michael, asked us to help him prompose to her. So we got Sara's family to bring her here to the show saying that she won free tickets. Zoe, our other girl, is an actress so she's halfway home right now. And Michael is out on the boulsevard sweating it out in the Kristof costume, she has no idea it's him."

"To make things more dramatic, Michael and Sara have never been on a date before, Sara has no idea Michael is asking her to prom," she continued. "This could go terribly wrong. You gotta admit, it could make great TV, right?"

When the two returned to the studio, Michael removed his Kristoff head, saying, "Sara, there's something I wanted to ask you, but I didn't know the words, so Kristen Bell is going to help me." 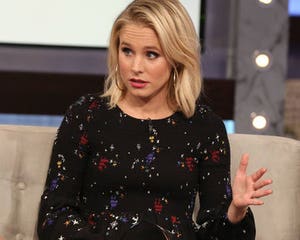 How Kristen Bell Is Fighting Her Battle With Anxiety, Depression (Exclusive Video)

Her answer: an emphatic "Yes," before Bell could even finish the song.

"You guys will be receiving a 'Kristen Bell Live' prom package including a glam session for Sara, a tux rental for Michael, a stretch limo for both of you, and a case of beer," Bell said. "Just kidding about the beer. Congratulations!"