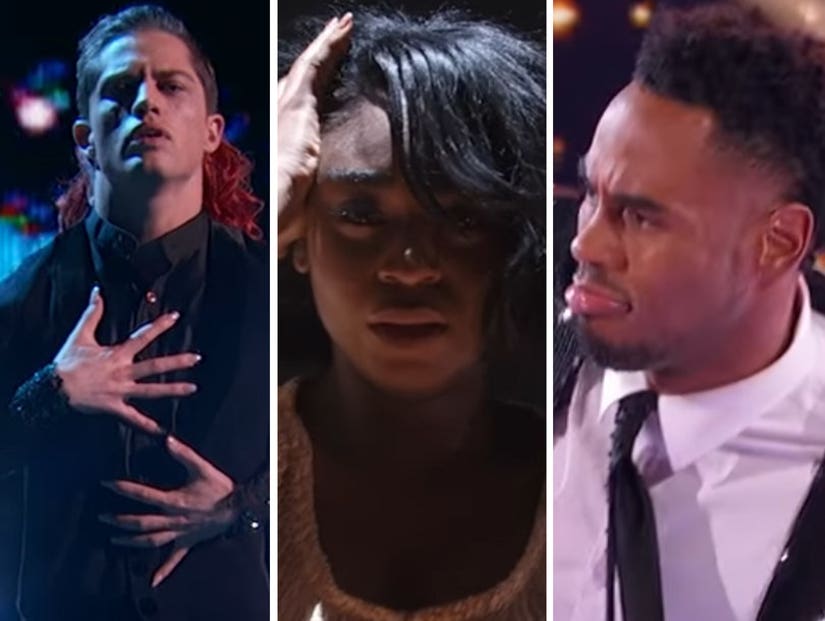 It's TooFab's officially unofficial "Fifth Judge" and we made it. Together.

After eight weeks, the remaining five couples have made it to the quarterfinals. The finale is in sight, but who has what it takes to make it on a night that will push them harder than ever, with two complete dances each. Round one featured a song the professional partner chose to reflect their celebrity partner.

Julianne Hough returned to the judges panel after two weeks away, and she was even more excitable than ever. Fair warning, since I'm safe at home, I'm probably going to be a little harsher than my colleagues Carrie Ann Inaba, Len Goodman, Julianne Hough and Bruno Tolioni. But I might be nicer, too. Maybe.

NFL running back Rashad Jennings & Emma Slater put a little too much jazz in their opening jive, but her goal of showing what a fun spirit Rashad had worked beautifully. The piece was up-tempo and just a hoot to watch, with the audience feeling the joy. Rashad's smile and attitude are definitely infective, but I wanted to see a little more bounce in his step.

He was ever so slightly heavier on the heels of his feet than Emma was, plus his toes pointed up a bit too much. I can't judge too harshly, because I couldn't see most of it due to the staging. Rashad remains a front-runner, and the strongest male in the competition, but I've not seen champion caliber work out of him in a few weeks now.

Rashad & Emma w/ Witney Carson gave me just what I was looking for. This is a contestant hungry for a championship. His individual partnering was impeccable, with some of the most impressive and challenging lifts we've seen yet. But when the three of them came together, he was able to keep up with both of them with the sultry Argentine Tango.

Wow, was this a powerful bit of storytelling, and it's huge that Rashad didn't get lost behind the amazing pair of women fighting for his affection. This may well be his best performance yet. I'm even willing to forgive a moment where he lost his timing, and the times his flicks weren't quite sharp enough.

Fifth Harmony member Normani Kordei & Valentin Chmerkovskiy dug into the emotions of racist cyberbullying she had experienced since becoming famous for their contemporary piece, and you could see that it touched her deeply. Impressively, there was absolutely no difference in commitment, connection or form between the professional dancer and the celebrity.

Normani has a dance background, but a personal contemporary piece almost demands the technique be secondary to the emotional journey of the piece, without sacrificing any of the form. It's a tough balance to achieve, and one they captured perfectly. My only criticism was in the choreography, where I wanted a little more pathos, but I can't fault the performance at all. It was flawless.

Normani & Valentin w/ Alen Bersten performed a country jive, with Bonner on Normani's mind as the perfect country gentleman (and hot!). The dance featured the best cameo of the season, when she abandoned both dancers for Bonner at the end. I was surprised to find Normani a little heavy on her feet in just a few moments, but overall she gave another stellar performance. I loved the nod to a classic country line dance, too.

The story about her needing directions was really poorly handled, and abandoned immediately, but with dancing this upbeat and fun, who cares?

Bull-rider Bonner Bolton & Sharna Burgess suffered some friction as he is tired of focusing on his accident, but that is his story, an surmounting that is what she wanted to express in this Argentine tango. The tension actually worked for the attitude of the piece, which was one of the more confident dances we've seen from Bonner yet.

He's still got a long way to go, and it's hard to say how much of his stiffness is due to his injuries, but there were some genuinely nice moments of tango in this piece. He's got no shot of winning, but is developing into a fairly decent dancer on this stage.

Bonner & Sharna w/ Britt Stewart created a corporate piece, revealing that they were struggling to tighten it up as recent as Sunday. Bonner was his usual stiff self, but this time, he even looked too much like he was working, lacking any compelling stage presence. He could have been a mannequin his facial expression was so stoic throughout, but he did know the choreography.

Jazz just has too much fluidity in motion and Bonner couldn't handle it all. This looked almost like a first week performance, and marked a big step backwards for him. Inaba said the routine was "kind of raunchy."

Olympic gymnast Simone Biles & Sasha Farber performed a very fun foxtrot, with the emphasis being the glow she has about her. Simone has one of those effortlessly joyful personalities and it carried her through some difficult steps in this dance. She had a few misfires in her footwork, and a few places where her carriage slipped slightly, but for a gymnast out of her element, this was an impressive ballroom performance.

Simone is a definite front-runner but I agree that we're waiting for an emotional connection. I still expect her and Normani to battle it out for the Mirrorball Trophy in the end.

Simone & Sasha w/ Brittany Cherry created an interesting challenge, so Sasha decided to choreograph as if he were the celebrity and Simone were a professional dancer. This meant she had to step up to professional level in a hurry. The choreography was very smart, putting the spotlight on Simone throughout, while also keeping in the proper spirit of a paso doble.

Even better, Simone acted the intensity of the piece extremely well. Gone was the innocent, giggly girl we've seen every week. She took the judges notes from just one hour prior really to heart and it showed in a very strong performance.

Former Cubs catcher David Ross & Lindsay Arnold gave a beautiful father-daughter dance, and he's never been better. This was the first genuinely emotional performance for me (sorry Normani!), as you could see the affection they had for one another. Even better, it was the strongest technical performance David has yet given. His extensions were perfect, his footwork was there (not flawless, but completely there), and his frame was on point.

His “Magic Mike” hip hop style was the most confident he'd been on the stage until this moment. He believed in Lindsay and this story, and it showed.

David & Lindsay w/ Hayley Erbert struggled with a paso doble. David knew the steps, but was far too stiff and not nearly commanding enough to properly portray the male lead in this gladiotor battle. Unfortunately, there wasn't nearly enough paso in the choreographer, either. So it's even more unfortunate that he wasn't commanding enough in any of the steps. The ladies were solid, but it seemed like they were just dragging him around the stage.

His form was wrong, his steps not strong enough. It was a big misstep for the fan-favorite.

This week, the strongest two dancers -- Normani and Simone -- were declared safe first, meaning there was some sanity in the world, after all. David quickly followed them, leaving the superior Rashad against Bonner for elimination. Thankfully, it was the end of the road for Bonner.

A nice guy who worked hard, but he was clearly out of his element as well. David is out of his league as well, but he was rightfully declared the heart of the competition. He should probably go next, leaving us with a very strong final three in Rashad, Simone and Normani. Normani has the slight edge there, but both of the other two have shown moments of brilliance. It should be a good run to the end.