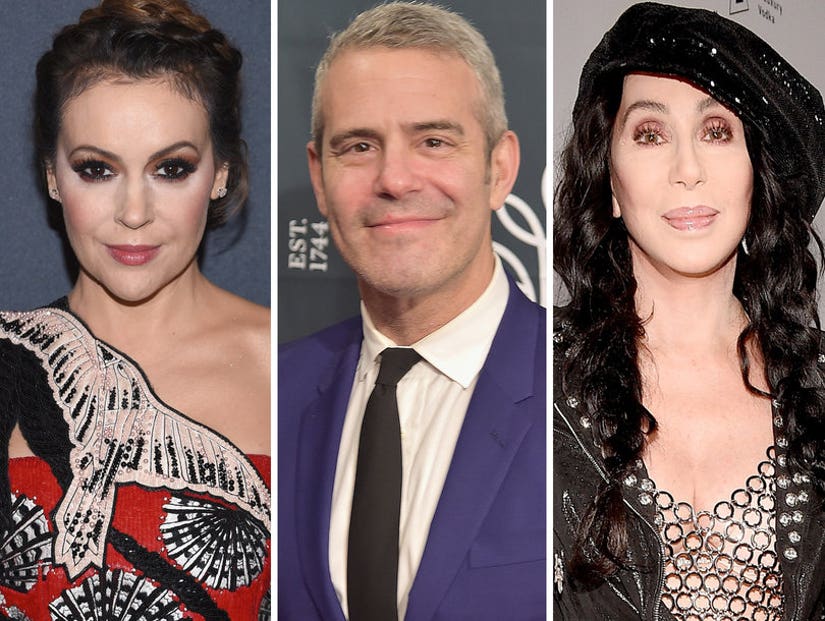 FBI Director James Comey has been fired by President Trump.

"The FBI is one of our Nation's most cherished and respected institutions and today will mark a new beginning for our crown jewel of law enforcement," Trump said statement.

According to the White House, "a search for a new permanent FBI Director will begin immediately."

Hollywood is already sounding off with shock on Twitter.

Donald Trump definitely has syphillis!! Who would act like this? Nixon must have had syphillis too! @MitchMcConnell you better wake up

HOUSEWIVES PLAYBOOK: he saw Cynthia rip up Nene's friendship contract and thinks he can do the same thing https://t.co/91OaMWRsl3

So, who will replace Comey?

We are to trust that whomever you hire to replace Comey will lead a fair nonpartisan investigation into your collusion with Russia, @POTUS? https://t.co/NiqeIYzMRK

What a co-inky-dink. Connect the dots, people. It ain't a bunny with a bonnet in a sail boat. https://t.co/79AyQpoIxc

It's your move, @GOP. Who will step up and be the hero?

The only person I'd trust as new Director of FBI is fictional character Fox Mulder.

Wow. I have no love for Comey but....Rather than drain the swamp, T is emptying the halls. Who's left? His kids and a bunch of amateurs. https://t.co/DvBTVSEM68

My money's on Tiffany Trump. https://t.co/cG0vQl5SGC

COMEY FIRED! Dirty, corrupt things afoot. The truth will all come out. The unraveling continues... Hold the election over. Dirty. Corrupt.

I am shocked, shocked to learn that Sessions who lied about Russia, recommended that Trump fire the man investigating them both about Russia

Wonder if Trump will nominate me to serve as FBI director. Don't laugh. Being a white man, I'm totally in the running.

When you're fresh meat, kill and throw them something fresher. pic.twitter.com/jp4NYsZ0Fv

Firing the FBI Director seems like the kind of thing a President does when he knows he's going to jail. (See: Nixon, Richard)

Jesus. It's terrifying how funny this is. 😔 https://t.co/n8xluylGoc

Strolling into the brand-new FEDERAL BUREAU OF IVANKA like pic.twitter.com/wNtZdBdoPX

Though I blame Comey for Trumps win, also believed he'd get to the bottom of #TrumpRussiaCollusion Got to take back House & Senate in 2018!

Dear @FBI,
You know what to do.
Love,
America

Are you kidding me? https://t.co/wDue1bfnEs

The wheels are coming off the crazy bus. He can fire those who might discover it, but the truth will out. Tick tock, time's almost up.

TRUMP SAYS 1 OF THE REASONS HE FIRED FBI DIRECTOR COMEY IS
BECAUSE OF WHAT HE DID 2
HILLARY CLINTON.GOD,HE IS A
A GUTLESS,LYING,TRAITOR ‼️

Trump might just as well have said: "Lock me up" Last gasp of a dying man. GOP stop being unpatriotic pussies. #SpecialProsecutor

The President of the United States just fired the head of the FBI who is currently investigating him. Our democracy is toast. Bye Felicia.

Orange Shady is gonna make sure we never get to the bottom of this madness! "Nixon The Sequel". Remember the firing of Archibald Cox?! Hmmmm https://t.co/8AjXBwKCkB

So will Tiffany be going to law school while she's running the FBI? Pace yourself, girl!

#COMEY This is absolutely OUTRAGEOUS!!! The Head of an IMPARTIAL agcy was FIRED bc he was uncovering corruption in the WH! #🔥🔥🔥🔥🔥🔥🔥🔥🔥

(RT) Sessions recused himself from trump Russia then got the man in charge of it fired.

The firing of Comey is a very dangerous development for this republic. Make no mistake we are now living under a fascist regime.

Is this ever going to reach a conclusion? How is firing the person in charge of investigating you not an abuse of power?
High Crimes anybody

PLEASE WAKE UP THIS IS CRAY YALL https://t.co/eC92lM5Gl8

We don't need a special prosecutor. We need an Auror. @jk_rowling

So AG Jeff Sessions who had to recuse himself from the Russia investigation recommends firing the man in charge of said investigation. 🤔

i am ashamed of how badly we have handled trump https://t.co/Ifcm7jEM7G

You and all your "party over country" @GOP friends are going down with this administration.
THAT's the fresh start that will serve us well. https://t.co/4YBNHNurfw