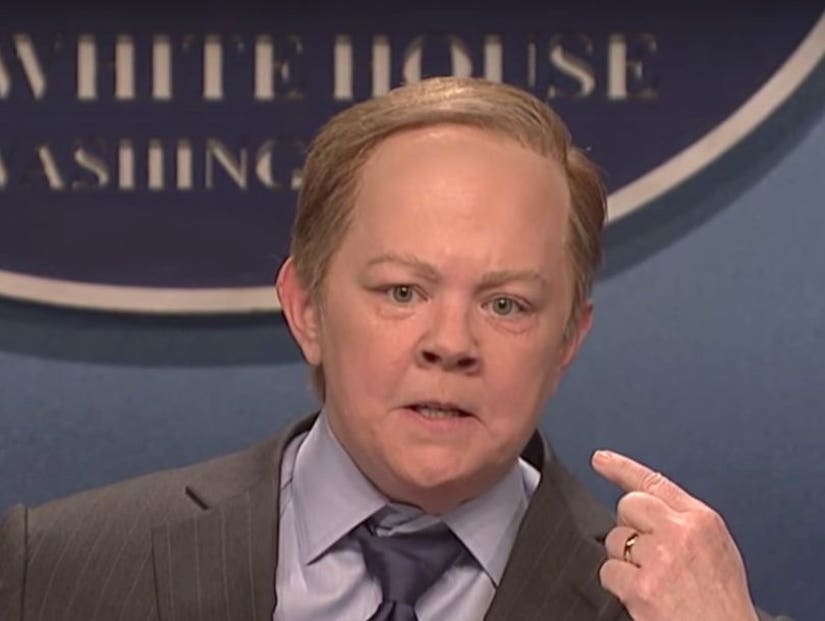 We knew we were in for a good show when Melissa McCarthy was announced as hosting this penultimate episode for the season. Not just for her hilarious Sean Spicer impressions this season, but because she has proven herself one of the most versatile and entertaining guest hosts we've seen in years. With this appearance, she joins the vaunted “Five Timers Club,” marking her fifth time as host, though she's been on the show several more times with her now-classic cameos.

Spicer continues to be a remarkable fount of comedic influences, so anticipation was high for how she would pay homage to her most famous impression on the show. Footage of her dressed as the White House spokesman while driving his podium through the streets of New York leaked a few days ago, building anticipation for her appearance. Whether this means a pre-recorded bit is pending or it was just a publicity stunt, it absolutely worked. But could her fifth time live up to the hype?

A sequel to the mom haircut sketch, this time the focus was on finding the right animal for a new mom in the neighborhood. It was Stepford Wives creepy, but it wasn't funny … like at all. Some sketches don't need a sequel. It was just an excuse to make jokes stereotyping mom things like Purell clips on purses. Nope. Didn't work.

In a previous appearance on the show, McCarthy had an appearance where she wound up getting slammed with food in the face over and over again. They went to the well again in an otherwise empty game show sketch, basically slamming her in the face with pies and a cake. McCarthy proved once again game for getting disgustingly filthy, but they forgot to add in any jokes, and the premise was just too thin.

Creating a new logo for a company that makes children's films. Supposed to be like Dreamworks, but instead they feature McCarthy in a bathrobe being unhinged, uncomfortable and crazy. The short bit made no sense, but had a bright moment when she threatened to beat up a kid after popping his balloon. Was probably just an excuse for McCarthy to dress down and go eccentric again. But it was deservedly at the end of the show, as it wasn't particularly strong.

McCarthy put a unique twist on the classic backstage run monologue by choosing a surrogate mother from the audience to bring on a tour of the backstage. The Llama was there, but no chorus girls, as well as Ryan Reynolds and Blake Lively for no reason. It was a string of random nonsense carried by McCarthy's silly charm. Not funny, per se, but sweet and sincere, making you smile throughout as audience member Joan got to walk through the door as a mother like she was hosting the show.

Marion Coutier (Cecily Strong), Lupita Nyong'o (Sasheer Zamata) join Kate McKinnon's Debette Goldry bit. McCarthy was a fellow actress from the golden age of cinema who suffered similar atrocities as Goldry always shared. The highlight joke of the bit was after both women said they removed half of their ribs to get film roles. McKinnon grabbed her breasts and said, “These are my lungs!” It was so random and ridiculous, it made an otherwise repetitive sketch memorable. We've seen this bit so many times, it's just variations on the same thing.

After a weak call-in appearance last week, Alec Baldwin returned for the cold open with a strong turn as President Trump, mocking everything from the firing of James Comey to allegations he records everything that goes on in the White House. A particular highlight was when he denied being similar to Richard Nixon, but then hit Nixon's classic double-peace-sign pose while touting that he gets two scoops of ice cream. Considering this stuff all came right from the headlines, it practically wrote itself, but Baldwin had fun in the role. Michael Che brought nothing to Lester Holt save being the guy in the wig, but it didn't matter. This was Baldwin's sketch to carry.

Steve Martin showed up to welcome her to the club, wearing his jacket. Baldwin didn't have his because Martin told him not to wear it, but Melissa officially got hers. This is a callback dating decades with the establishment of the club in the 1980s. A very cute ending, and nice that she got the jacket as one of the strongest hosts of the modern era.

There was a bit of a mean streak through this faux commercial, poking fun at the elderly. But by damn if I didn't laugh anyway. Maybe we're just terrible people -- or maybe it's just me. Having a variation of the Amazon Echo that answers to any name and patiently repeats itself to the elderly as they get confused and ask their questions again. The Echo casually correcting elderly racism and helping them find things in the house is a fun addition. But it was the “uh huh” feature that put it over the top, so Alexa can say “uh huh” when your elderly loved ones are rambling on.

In what has surprisingly become one of the most enjoyable ongoing storylines of the show, we checked in again on the fake romance between Kyle Mooney and Leslie Jones. While they now have a child -- the adorable Little Lorne -- the relationship is on the rocks. Kyle is so passionately in love, and Leslie is busy. They seek counseling, where Kyle admits he cries during sex, and Leslie admits she things this makes him a “little bitch.” Unfortunately, they were seeking advice from McCarthy who just wanted to lose her lines. It's such a soap opera of silliness, you can't help but get roped in. Leslie's flirting with Colin on “Weekend Update” pushes Kyle to the limit. Lorne doesn't usually condone cast-members shooting one another, but Colin can be pretty annoying.

I really feel like the Trump Administration is making the writers' jobs on “SNL” too easy. Once again, “Weekend Update” brought a solid outing riffing off of the ridiculous things that make our real life in America these days. Props to Colin Jost for a joke that burned Trump's firing of Comey and United at the same time. Firing the FBI director whose investigating you is like shooting a drug-sniffing dog that comes around your bag. Either you're hiding something, or you work for United. Guests this week included Pete Davidson talking about his sobriety from drugs, and Cecily Strong as Michael Che's neighbor ranting about Trump. Not their strongest outings, but the news jokes themselves carried the sketch well enough.

We've seen McCarthy as Sean Spicer so much, it was unclear if she could continue to bring hilarity with such consistency, but she absolutely did. McCarthy throws herself so completely in the role, assaulting poor Glen in the press pool, and even throwing a pillar at them. The New York podium clips were from this sketch, as she went out to find Trump after the press suggested he didn't really like Sean at all. This gave us a fun pairing of Baldwin and McCarthy as Trump and Spicer that got a little racy and uncomfortable in a hurry. But it never stopped being funny.Lorne watches on.

There wasn't a clear stand-out this week, as McCarthy was strong enough to carry much of the show, and Baldwin had a pretty heavy presence himself. I'm going to give it to Kyle Mooney, though, for the depth of his performance in the sketch checking in on his “relationship” with Leslie Jones, and for his awkwardly long hug with Joan in the cold open.