Reese Witherspoon teased the possibility of "Big Little Lies" Season 2 during her appearance Wednesday on "The Ellen DeGeneres Show."

"We hope so," Witherspoon said. "Nicole [Kidman] and I produced it as well so we've been talking to the writer [of the book] Liane Moriarty about new ideas of what these characters could do. It seems like people just love the characters."

Witherspoon plays a mom from Monterrey, CA on the hit HBO series. Nicole Kidman, Laura Dern, Shailene Woodley and Zoe Kravitz star in the show as well, which focuses a group of moms and their ties to a murder that happened at a school fundraising gala.

"Hopefully we can go on," Witherspoon said. 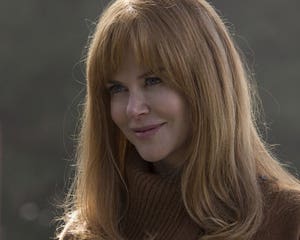 Later in the show, Ellen took a moment to go over some of the inappropriate texts that Witherspoon gets from her mom, which she often shares on her Instagram.

Witherspoon said she gets her sense of humor from her mom, retelling a story of her mom and a silly moment she had at the Apple Store.

"My mom is like me, we like to make people laugh." Witherspoon said. "She was telling the kids the other day that she went to the Apple Store to update her computer and the guy said 'do you have any storage left?' and she goes, 'don't worry, I keep all my nudes selfies in the cloud.'"

Witherspoon also said she likes embarrassing her kids with her very "white" version of "The Dab" which she demonstrated for Ellen.