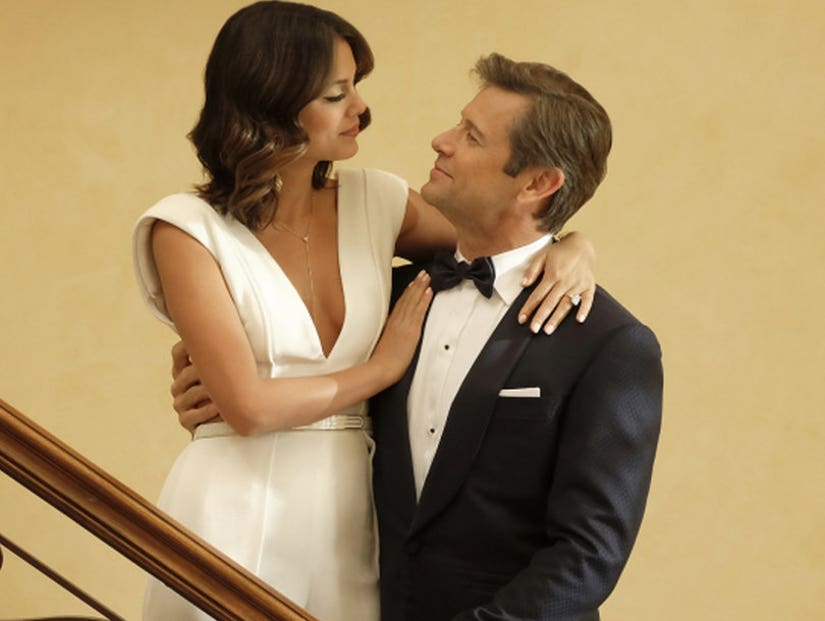 The CW unveiled its fall lineup of brand new shows and returning favorites Thursday as part of this week's network upfront presentations and TooFab has all the first looks for you.

"Next season we have four new scripted series, continuing our mission of adding more original programming to schedule all year long," The CW's president Mark Pedowitz announced. "Next season, we will have our strongest schedule ever, with a broad range of series to appeal to both women and men, across a wide range of demographics. And we will continue to provide our advertisers new opportunities to reach our audience, the youngest of any broadcaster, on every platform."

The newcomers include a reboot of "Dynasty" and military drama "Valor" for the fall" and superhero show "Black Lightning" and Lucy Hale comedy "Life Sentence" midseason.

Watch the trailers below. Synopses via The CW.

Fallon Carrington (Elizabeth Gillies) is charismatic, cunning, and poised to become the new COO of her father's global energy empire – or so she thinks. When her father, Blake Carrington, (Grant Show) summons Fallon and her brother, Steven, (James Mackay) home to the family compound in Atlanta, Fallon is horrified to learn that the reunion isn't to announce her promotion – but rather to make the acquaintance of their stepmother-to-be, Cristal (Nathalie Kelley).

Jefferson Pierce (Cress Williams) is a man wrestling with a secret. As the father of two daughters and principal of a charter high school that also serves as a safe haven for young people in a New Orleans neighborhood overrun by gang violence, he is a hero to his community. Nine years ago, Pierce was a hero of a different sort. Gifted with the superhuman power to harness and control electricity, he used those powers to keep his hometown streets safe as the masked vigilante Black Lightning. However, after too many nights with his life on the line, and seeing the effects of the damage and loss that his alter ego was inflicting on his family, he left his Super Hero days behind and settled into being a principal and a dad.

Choosing to help his city without using his superpowers, he watched his daughters Anissa (Nafessa Williams) and Jennifer (China Anne McClain) grow into strong young women, even though his marriage to their mother, Lynn (Christine Adams), suffered. Almost a decade later, Pierce's crime-fighting days are long behind him…or so he thought. But with crime and corruption spreading like wildfire, and those he cares about in the crosshairs of the menacing local gang The One Hundred, Black Lightning returns — to save not only his family, but also the soul of his community.

An elite unit of U.S. Army helicopter pilots called the Shadow Raiders are sent on a top secret mission to Somalia, a mission that goes terribly awry. Only two members of the team return safely: Warrant Officer Nora Madani (Christina Ochoa), one of the unit's first female helicopter pilots, and her commanding officer, Captain Leland Gallo (Matt Barr), while the whereabouts of their comrade Jimmy Kam (W. Tre Davis) are unknown. Now back in the U.S., Madani and Gallo are the only ones who know the truth about what really went wrong in Somalia.

Nora's boyfriend, First Lieutenant Ian Porter (Charlie Barnett), suspects she's not telling him the full story, and Jess Kam (Corbin Reid), Jimmy's wife and Nora's friend, is frustrated and furious at being kept in the dark. Meanwhile Thea, (Melissa Roxburgh) the enigmatic CIA officer charged with investigating the failed mission, has her own suspicions about what occurred. With Nora still recovering from a gunshot wound suffered during the mission, the commander of the Shadow Raiders, Col. Robert Haskins (Nigel Thatch), grounds her from flying. But when it's discovered that Jimmy is alive and being held captive by a group of ruthless terrorists, Nora is determined to join Gallo back in the cockpit to rescue their friend. As preparation and training intensify, Nora and Gallo grow closer, and soon find themselves torn between duty, honor and desire as they wonder who they can trust, and whether the secrets they're hiding will help save Jimmy… or put them all in terrible danger.

LIFE SENTENCE follows Stella (Lucy Hale), a girl who has spent the last eight years living like she was dying (because she was). Just like the “manic pixie dream girl” heroines in her favorite sappy cancer movies, Stella traveled the world, faced her darkest fears and found true love on a whirlwind trip to Paris. But when Stella finds out that her cancer has been cured, she is suddenly forced to face the long-term consequences of the “live in the moment” decisions she made, including marrying a total stranger. And if that's not enough, she also finds out that her “perfect family” isn't so perfect after all.