Harry Styles wants James Corden to draw him like one of his French girls.

Though the former One Direction star has done "Carpool Karaoke" before with his ex-bandmates, he joined the "Late Late Show" host for a solo round on Thursday night. After his week-long gig co-hosting Corden's show, he ended his mini-residency with one of the show's most viral videos.

And what an edition of "Carpool Karaoke" it was! 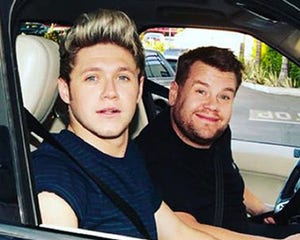 After singing a pair of songs from Styles' new, self-titled album, Corden critiqued his guest's outrageous fashion sense, telling him, "it's quite annoying because you can pull it off. I don't know if I could wear that!" A fashion montage followed, as the two kept exchanging shirts to see who was able to pull of what. Unfortunately for Corden, Styles looked great in pretty much everything.

The duo then took on OutKast's "Hey Ya!" and Diana Ross and Lionel Richie's duet "Endless Love," before talking about the musician's love of romantic comedies.

To prove his devotion, Corden had them act out scenes from "Notting Hill" and "Titanic," with Styles in the roles made famous by Julia Roberts and Kate Winslet.

They ended the segment by rocking out to a third song from Styles album, "Kiwi."