After getting some online backlash for her comments on Tuesday's show about Vice President Mike Pence, Whoopi Goldberg had to "clear something up" this morning on "The View."

Right after the walkout, the show's moderator addressed the cameras straight on saying, "Before we do anything, I need to clear something up."

"We were having a discussion yesterday and for some reason, people misunderstood something that I said," she said. "[Jedediah Bila] and I were discussing why people might have gotten up and left a commencement speech that the Vice President was giving. I was trying to make an analogy of what it would be like if I were sitting there, what would make me get up and leave and people decided that I was saying that [Pence] was part of the KKK. It's insane, but that's how people took the analogy." 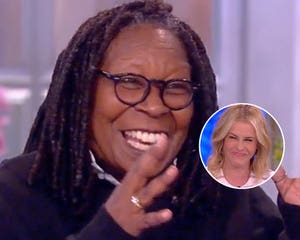 "No, he's not part of the KKK and I don't think his speech had anything to do with anything hateful or terrible," she continued. "But if people feel that you don't represent them, that might have been a reason people were walking out and that's the point I was trying to make. No, Mike Pence is not part of the KKK."

Her clarification came after the women of the show had a heated debate Tuesday after students at Notre Dame walked out of a commencement speech given by Pence.

"I shouldn't have to listen to a guy who's wearing a hood who I know wants to string me up," she added.

"That's a little bit different. He's not trying to kill people," Bila responded, before Goldberg went in on "isms." 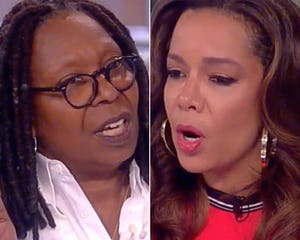 Only a couple websites picked up her comments, with their followers chiming on on her words on Twitter:

YESTERDAY WOOPIE INSINUATED VICE PRESIDENT PENCE IS KKK, THAT IS WHY THE GRADUATION STUDENTS LEFT THE CEREMONY.
TODAY, CHANGES, HIGH💊

The reason @TheView is so left-leaning is BC the rest of America is out working instead of comparing Pence to the KKK. What idiots. SMH

@WhoopiGoldberg commits #hatespeech against @mike_pence by labeling him KKK. Such intolerant hatred for our VP https://t.co/KI2m88ie42