“The Simpsons” is back with another brutal takedown of President Trump, and it looks like things are deteriorating rapidly. 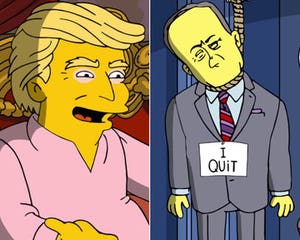 “Look, I want a do-over,” Trump says. “I have no tapes. Let's make a deal: you hand over all your notes, and I'll erase the tapes — I MEAN THERE ARE NO TAPES! No tapes!”

Their conversation is interrupted by the ghost of Richard Nixon, who is delighted to now be moving up in the ranks to the 44th best president, thanks to Trump. “I just have one piece of advice: if you have tapes, burn 'em!”

Trump says he hasn't touched Melania in three months and asks Comey for a hug and some advice. “I dunno,” Comey replies, “start hanging out with people who are more honest than you?”

This video was “paid for by the Committee to Turn The Clock Ahead to 2020, or Back to Whenever, Just Not Here.”