The actor hit the stage at the Werq the World Tour in London on Tuesday, donning a wig to perform Whitney Houston's "I'm Every Woman." The show, hosted by "RuPaul's Drag Race" judge Michelle Visage, was packed with former contestants from the series including Kim Chi, Detox, Alaska and Bianca Del Rio.

The 33-year-old star -- who attended the show with his "Angels In America" co-stars Russell Tovey and Nathan Stewart-Jarrett -- impressed the crowd with his dance moves and one stellar backflip. 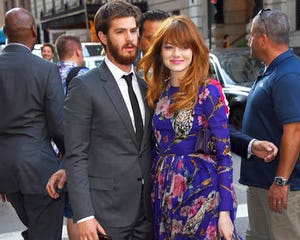 Why Andrew Garfield Might Just Be Best Ex-Boyfriend Ever

"What a show, what a night," Visage posted alongside a photo of her with Andrew and Laverne Cox. "Thank you as always 🇬🇧 YOU ARE MY HEART AND SOUL. Andrew Garfield, you are my new friend, I am SO proud of you for not just lip syncing Whitney tonight in a wig no less, but for opening your mind and heart to all it has to offer. @lavernecox you keep doing what you're doing, you are a trailblazer, a beauty and a 💎 I LOVE YOU #werqtheworld #tour #soldout."

Garfield is the second Spider-Man to do drag this month. The latest actor to sport a Spidey suit, Tom Holland, also crushed it when he performed Rihanna's "Umbrella" on "Lip Sync Battle" ahead of the MTV Movie and TV Awards.

While Andrew got the crowd pumped up above, we'd giving Holland the win if these two ever had to lip sync for their lives: