Twitter is still exploding over Bill Maher dropping the N-word during an interview with Republican Senator Ben Sasse Friday night on his HBO show “Real Time with Bill Maher."

While discussing Halloween in Nebraska, the Senator told the HBO host, "We'd love to have you work in the fields with us."

Maher subsequently apologized for his remarks on Saturday.

"Friday nights are always my worst night of sleep because I'm up reflecting on the things I should or shouldn't have said on my live show," he said in a statement. "Last night was a particularly long night as I regret the word I used in the banter of a live moment. The word was offensive, and I regret saying it and am very sorry." 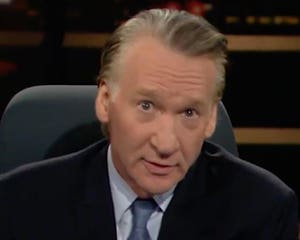 HBO denounced Maher's use of the word as "completely inexcusable and tasteless" and said they were "removing his deeply offensive comment from any subsequent airings of the show."

Sasse appeared to nervously laugh at the comment, but later clarified on Twitter that he was actually "cringing" and wished he had spoke up in the moment.

The senator was on the show to promote his new book , “The Vanishing American Adult.”

Am walking off a redeye from LAX.
3 reflections on @billmaher
1. I'm a 1st Amendment absolutist. Comedians get latitude to cross hard lines.

2. But free speech comes with a responsibility to speak up when folks use that word. Me just cringing last night wasn't good enough.
(2of4?)

(4of4)
"...The history of the n-word is an attack on universal human dignity. It's therefore an attack on the American Creed. Don't use it.”

The rest of the Internet wasn't having the comment either, as a few celebrities, media figures and angry fans condemned Maher on Twitter:

Unacceptable. And the audience applauds!?! So hurtful.

Maybe don't be the white guy that tries to explain why it was okay for Bill Maher to say the n-word.

The one black person in the studio audience after Bill Maher said the N-Word on his show pic.twitter.com/W6zWjKAXTj

Half the people telling you its OK for Bill Maher to say N***er spent the past week upset over a ladies only screening of Wonder Woman.

Lesson for Bill Maher: You can have black friends, black guests, even black dates, but that doesn't make you black. pic.twitter.com/DSFIchu5JB

"Nobody can screw up a career better than me" Tiger Woods
"Hold my beer" Kathy Griffin
"No, both of you hold my latte" Bill Maher

Others also said HBO should fire him:

But really, @BillMaher has got to go. There are no explanations that make this acceptable.

Can you finally fire Bill Maher, @HBO? He's a morally bankrupt antiquated buffoon who, most importantly, has NEVER EVER been funny.

. @billmaher is a racist and bigot. @HBO must fire him this is not acceptable https://t.co/nlmFcDoWAk

I support Bill Maher being fired because they need to suffer a little under their own bullshit rules to save the old, principled ones.

Bill Maher said the "N" word on T.V. tonight and they say we're the racists. If a conservative had said that, he would be fired immediately. pic.twitter.com/JpR7DlCLRD

Why is Bill Maher using the N word& @BenSasse laughing at it & talking about working in the fields?

Mayer should be fired & Sasse replaced!