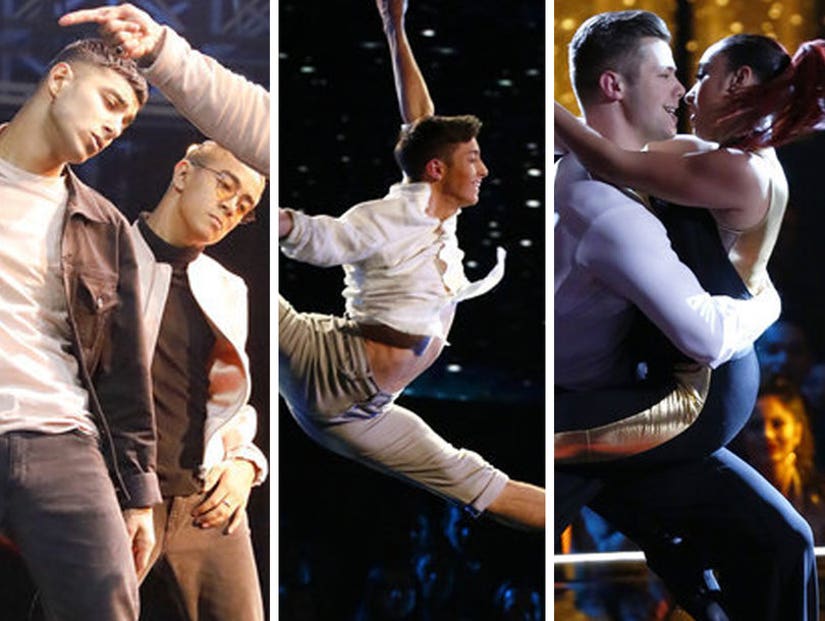 This may well be the best dance competition on television, as Jennifer Lopez set out to create. Some of the best dancers from TV's other competitions have come to compete, and if the premiere was any indication, it's going to be very difficult to determine a winner. It's a good thing the judges are using a more complicated point system, as it's the only way to compare such disparate performances.

This young dance troupe came with their creator Valerie, who trains these kids and helps give them some direction in their lives, as many of them come from underprivileged homes. You could see the dedication and passion they brought to their practice and performances. They were tight and talented, and didn't shy away from difficult stunts either. Even better, these kids had stank face like nothing. I totally believe that they are bad boys and girls for life, for real! Kids shouldn't be that polished, but damn it these kids are hella talented. This was so impressive.

This “So You Think You Can Dance” winner (Season 10) grew a lot on that show, but was never as polished as his trained competitors. So to impress the judges, he chose to choreograph a piece that told the story of his life coming from a broken home. The musicality and emotion of this piece was palpable, proving that hip-hop and freestyle can carry just as much emotional impact as contemporary. Fik-Shun has grown leaps and bounds even from his time on “SYTYCD.” It was a beautiful piece, but even more than that, his musicality was impeccable. It was a stunning piece of artistry.

These were talented dancers individually, but as a group, they lacked synchronicity in some pretty key ways. When legs are going up in the air that are supposed to be together, and one comes up later it really stands out. Latin ballroom is very difficult to do, but I needed more polish. I watched a lift toward the end with a rough ending, and you could see that lack of professional tightness throughout the routine. I think it was a little sloppy overall, and they're not quite at the caliber of some of the other dancers we've seen. But they'll move on to try and prove Ne-Yo and me wrong.

The jock and the bookworm came together in this pairing. Luka said you wouldn't expect him to be a ballroom dancer, but he absolutely impressed me. He had the carriage and the technique of someone who'd been doing this much longer than three years. They pair took on some very challenging lifts that seemed to go on forever. At 19- and 16-years old they'll only get better with more practice and experience, and they're already quite good. There were definitely some issues with some of the footwork and the music interpretation, and perhaps more of a reliance on stunts than necessary, but there's no denying their talent or watchability. This is a couple you can't take your eyes off.

This Norwegian trio featured two twins and their close friend who gained national fame by winning “Norwegians Got Talent.” This was like hip-hop met the quickstep. It was classic hip-hop dance moves done in a very uptempo manner. I was a little off-put by their choice of the song “Jolene,” because it's a song that tells a story and packs emotion, and I felt like their choreography did neither. The talent is there, and this is a very tight group -- I think I only saw two points where one of them was a little out of synch -- so that's more a personal gripe than a criticism of their talent. But it does impact the overall presentation. That said, I could watch them move like that for hours.

This young man danced like a rubber band, with amazing flexibility and yet precision and control throughout his wonderfully choreographed and performed piece. His toes were pointed, his gestures controlled and emphatic. It was a beautiful piece, and he is an absolutely beautiful dancer. I think I'd rather see him take on a world-class choreographer's moves than his own, but I cannot fault his talent or the hard work he has clearly put in to be able to move like that. I kind of wonder if his hips aren't double-jointed. I was never that flexible in my dancing days. Good night! This young man is something truly special. Even before he told the story of his dance, you could see that it was an emotional release for him.

The ante keeps getting raised each week on this show, and now we're promised the world-class modern legends of dance, the JabbaWockeeZ in next week's show. Yes, please!