Before she broke from Fifth Harmony to go solo, Camila Cabello turned down a collaboration on a track that would go on to become a massive hit, all because of her allegiance to the group.

The "Crying In the Club" singer was a guest on the Elvis Duran and The Morning Show today, where the host played a demo Cabello recorded for The Chainsmokers' single "Closer." Of course, Cabello doesn't appear on the finished track -- Halsey does -- so Duran had to ask what happened there.

"I recorded that song and so they were like, 'Oh do you want to be on the song?' and I love the song, but I had to turn it down," she revealed. "I was with the group at the time and we were about to put an album out and so I didn't want to, you know, I always tried to do my solo stuff off cycle, so that was super on and I had to say no. And then it was the number one song in the world!" 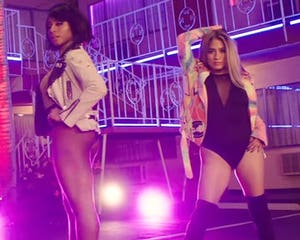 During the interview, Cabello also revealed her new song, "I Have Questions," was written during "probably the lowest part in my life so far." The singer, however, refused to get into specifics as to who or what the song is about.

"It was just stuff that was going on in my life that was just toxic things that were going on. I don't really like to speak too much in detail about it because I want people to hear the songs and relate it to whatever personal situation that they're going through and not have my thing subconsciously in their head," she explained. "Also, I can't say specifically," she added with a laugh.

"I felt like that song was the first time that I really opened up about how I felt. For a long time, I stopped writing for like 6 months because for me, writing means getting in touch with my emotions," she went on. "It means being honest with myself, it means going into the dark parts. I didn't want to go there, I wasn't ready to talk about what I was going through and I felt like after 6 months, I had this stored, I had the lyrics to this song stored in my phone for the longest time and I just couldn't get myself to really write the song. I felt like when I did, I showed it to my mom in the car, and she started crying because it just felt like for the first time I was talking about it."

"It felt so good and I realized really the only way to get through pain or get through sadness is to talk about it. If you keep it inside, I feel like it just comes back out in uglier ways and I felt like that's what was happening to me until this song happened," Cabello added. "From that, I wrote so many other songs about the same situation, which is the 'hurting' part of the album, and it just felt like I was just getting better and better as I was talking about it. I just felt like I was freeing myself, the music was really freeing me."