The "Scandal" star clapped back at critics who think celebrities shouldn't speak out publicly on politics during her appearance on "The View" Tuesday morning.

"I'm never going to give up my voice as an American because of what I do for a living," Washington said. "Neither should a firefighter or a teacher or a police officer, we all have to have our voices." 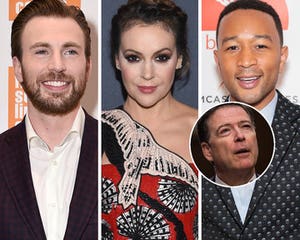 "I have to say, one distinction that's important for me to make is I'm not a politically active actor, I'm a politically active American," she added. "I don't participate in my democracy because I'm in the public eye, I participate in democracy because that's what democracy is. 'We the people' means we all have to show up and participate. Our leaders only know how to lead if we show up. One of the most tragic things for me was that half of this country didn't show up in the last election."

The Emmy nominated actress' words come days after "Transformer" star Josh Duhamel criticized celebrities for airing their political beliefs in a public forum. "Anybody in entertainment who thinks people care what they think politically are really misinformed," he told Fox News last week.

Whereas Sally Field shares Washington's sentiments, defending her right to speak out at this Sunday's Tony Awards, where she proudly supported Planned Parenthood.