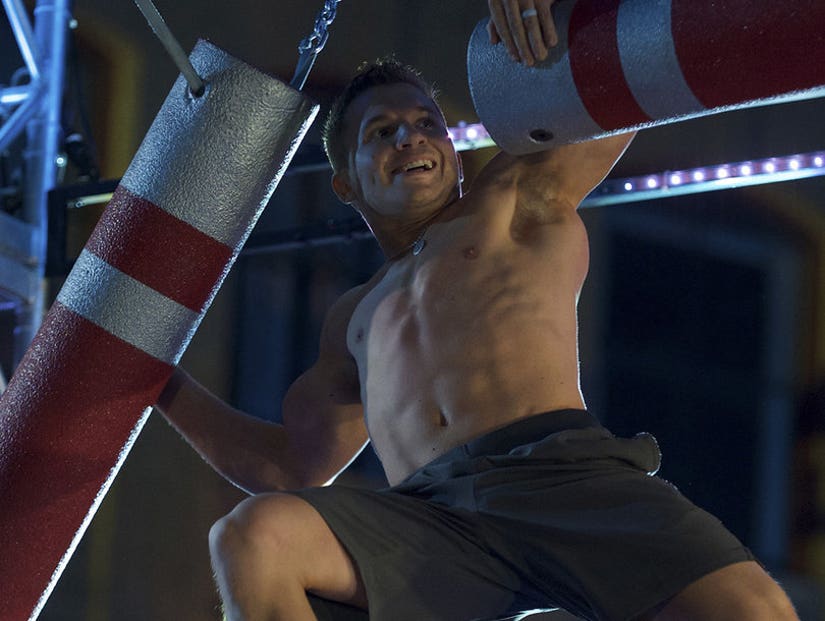 Two time Olympic medalist Jonathan Horton is returning to NBC's “American Ninja Warrior” Monday night to prove to himself that he is still strong enough to be an athlete during the first round in San Antonio.

Horton suffered an injury to his left shoulder that kept him from competition for the USA Gymnastics men's team at the 2016 Olympics in Rio. “American Ninja Warrior” will be the first time the 31-year-old athlete will compete in any athletic event since he underwent surgery on his rotator cuff a year and a half ago.

“I had to work really hard. I had to get myself back into the gym and pull myself out of a pity party because I lost my dreams of getting into the Olympics again. One thing I'd like everyone to know is after I got hurt, I was in the dark. I was pretty mad, in a lot of pain. I want people to know that even successful Olympians hit rock bottom in a way and I held myself back up. Whenever I got out of that hole, I found myself in front of the lights, cameras, a crowd and friends supporting me, it's all really good. It definitely reminded me me what it feels like to work hard for something,” Horton told TooFab.

Read what else Horton told TooFab about this season's fan made obstacles, intense training and getting back into the competitive spirit.

How does one train for American Ninja Warrior?

"My first season was kinda funny. I was very arrogant and cocky with what I thought my abilities on the show would be. I thought my gymnastics training alone would carry me all the way as far as I ever wanted to be in "Ninja Warrior." I was like, “Oh man, I'm a gymnast, I'm an Olympian, 'Ninja Warrior' is gonna be a joke.' I didn't train at all. All I did was gymnastics and I was certainly humbled by the sport. My first year in the show I fell on like the fourth obstacle and I was shocked by it. It's so much harder than people realize. Gymnastics is a good sport as a good base of basic strength for 'Ninja Warrior,' but there is lots of specific training you need to do. I now train three to five times a week here at a gym in Houston, Texas called Iron Sports. I go in there and have a lot of grip training and because you have to have a super strong grip, which is why rock climbers tend to do really well on the show. Then I do a lot of agility training. 'Ninja Warrior' training is definitely catching on."

Did any of your Olympic training help prepare you for the show?

"Obviously physically, gymnastics was a good base of strength to get ready for 'Ninja Warrior,' but Olympics in particular helped with just the mental side of it, being comfortable in front of a camera and crowd, in front of all of the lights and hype around it. A lot of the other competitors on the show, we've all become pretty tight at this point, it's become a family. A lot of them have come to me for advice on how to stay calm under pressure and what to do because I have competed in front of billions of people and it's scary and a lot of people have never been in front of a TV camera. So I think this prepared me for that side of it where people don't have that readiness. I'm also just confident in my athletic ability. I still make mistakes. I still mess up. I've fallen before on the show, butI definitely know how to keep my nerves in check."

You recently got surgery on your left shoulder, which forced you to drop out of the USA gymnastics mens team in Rio. Is this your first competition since?

"Yeah, about a year and a half ago, nine months before the Olympics. This is the first thing I've done athletically since that injury which is devastating because I was in very good shape. I was getting ready for the team in Rio and nine months before that I blew out my left shoulder and ruined my run for Olympics and pretty much my career. It took me a year to get back in shape. I made 'Ninja Warrior' my goal to show myself I could still be strong and athletic. I wanted to get back on and feel like a competitor."

Tell me about the feeling getting back into your competitive state?

"It was really satisfying. I had to work really hard. I had to get myself back into the gym and pull myself out of a pity party because I lost my dreams of getting into the Olympics again. One thing I'd like everyone to know is after I got hurt, I was in the dark. I was pretty mad, in a lot of pain. I want people to know that even successful Olympians hit rock bottom in a way and I held myself back up. Whenever I got out of that hole, I found myself in front of the lights, cameras, a crowd and friends supporting me, it's all really good. It definitely reminded me me what it feels like to work hard for something."

Will there be a close eye on your recovering injury throughout the season?

"It's 100 percent healed. It may even be stronger than it was before I hurt it. I did a lot of physical therapy, strengthening and conditioning so it's nice and strong again."

What are your thoughts on the fan made obstacles?

"I like it! The more creative we can get the better, assuming that there has to be a cap on how many are involved, but if we can get the community involved, we will have so many fun ideas come up. Every now and then something impossible to beat might come up, but it pushes the limit of human ability and I like it."

What has been your favorite obstacle thus far?

"Probably one that you'll see tonight on the show. I don't know what it's called, but I'll call it a flying ring. You grab onto a single ring and hop from one hoop to the next. It's high flying and fun and really challenging, but I really enjoyed it."

Which obstacle do you dread the most?

"All of balance obstacles or anything that requires patience and being methodical where you have to go slow. I can't stand those. I'm a gymnast and have good balance, but I don't like the balance obstacles."

What is your number one goal this season?

"Obviously I'd love to win, but my most important goal is to prove to myself that I'm still a strong athlete and that I belong on a show like 'Ninja Warrior.' It was really easy for me to kinda take a step away from what made me a good athlete after my I got hurt. I wasn't eating well. I wasn't working out so my biggest goal is to get out there and have a good time and compete again."