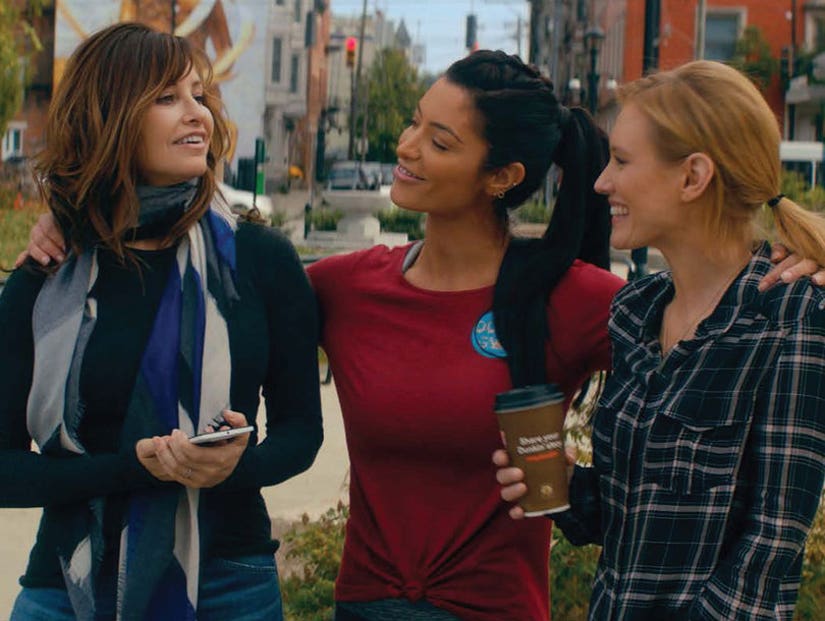 With her unmistakable red hair and take no prisoners attitude, Natalie Eva Marie made a name for herself in both the WWE and companion reality series "Total Divas." But, thanks to a little help from The Rock himself, she's taking on Hollywood without that fiery mane.

Marie will make her acting debut this Friday in the new thriller "Inconceivable," alongside Nicolas Cage, Gina Gershon and Nicky Whelan. The film not only marks her return to the spotlight since her suspension from WWE for violating their wellness policy last year, but also the direction she'd like her career to head in going forward.

Keep reading to see what she told TooFab about her transition to the acting world, how Nic Cage surprised her on set and whether she'd be interested in a "Total Divas" or WWE return.

Why was now the right time to venture into the acting world?

It's always been something I was definitely interested in and the opportunity came about at the perfect time. Luckily, for me, when I started WWE, my husband and I were like, if I can get in front of The Rock's agent and manager, that would be a dream. He's made the transition from WWE into Hollywood so fantastically. He is the guy right now.

A year later, it just so happens that it fell into place and I ended up having a meeting with his agent, then his manager, then I talked with Dwayne for an hour and everybody signed off on me and I signed with his exact team. I was with the right people so I could go in and audition for this film. I read the script, I went into the audition and ended up meeting with the producer, the director and it all worked out and now we're here.

Did The Rock give you any advice?

Yes, he's awesome. I literally couldn't ask for a better mentor. He's done exactly what I'm trying to do, he gets it. Going into an audition or putting yourself on tape, it's not the easiest thing to do especially because an audition is usually a camera and one person and then you have to bring to life this character. His advice to me is do the work, always put 110% effort into whatever it is that I'm doing, especially when it comes to these auditions and bringing these characters to life.

And then, be yourself when you walk into the room, never change. Leave it all in there. Once you're done, walk out and you're onto the next. That's what I've really tried to carry throughout the process of going in for auditions, and not taking anything too personal because there's so many factors that come into people getting roles, whether it's not the right look or doesn't have the right accent or wrong color hair. The list goes on, so you gotta take it lightly and move on.

You mentioned hair. Did you dye your hair for the audition or did you go in a red head?

I went in for my first initial audition with red hair and the director of the movie couldn't really see past the red hair and I don't blame him, it's a pretty crazy color that I had. The moment I walked into any room, it's more so my hair walked into the room.

Day one on set, when the cameras finally start rolling, what's going through your head?

I think pure, like, I can't believe this is really happening. But also a little out of body experience because I'm on set with tremendous actors. They're Academy Award winners, Faye Dunaway, Nicolas Cage, getting to work with Gina Gershon and Nicky Whelan. This is my first film and I'm amongst major superstars. It was a crazy, surreal feeling because not only am I so grateful, but then also I'm like, dude I better step up and bring my A game on set because all these guys are elevating my performance because they're such amazing actors and actresses.

What did you learn about yourself through this experience?

That I really can do anything I put my mind to. It definitely was a whole other avenue for me. Being with WWE and the reality show, it was a great experience in a sense of being comfortable in front of a camera and a live audience. WWE is like, you can't really get a bigger production as far as traveling wise and what they do on a day to day basis. So I really feel like that helped me become comfortable with it.

When I was on set with everybody, it wasn't too too far off of something I have experienced before with cameramen, being told where to stand or your cues, so I feel like that really really helped me sink in and become truly my character as time went on. I'm proud of this film, I think it's awesome, I'm very fortunate to be a part of it, especially being my first one. I feel like I stepped into the game.

Do you have a favorite Nic Cage moment?

For me, I was so excited to meet him because I'm a huge fan. He's a fantastic actor. When I saw him, he's a huge WWE fan and so is his son. So a cool cool moment for me was is that, on set, he Facetimed his son and I spoke to his son because he could not believe that Eva Marie from WWE was in a film with his dad. To me, that was like, are you kidding me? I had to call my brothers and tell them because that doesn't happen everyday.

Is this the direction you want to keep heading in now?

Absolutely. It's something I'm so excited about, it's awesome, you're able to expand and become different characters and really dive into different types of roles. I have another film coming out called "Action No. 1," which ironically, is about Nicolas Cage. He really got the "Action No. 1" comic book stole from his house and that's what this movie is about. I play a bounty hunter he hires to find his comic book. It's definitely a way different character than "Inconceivable," but that's the goal, to keep on going out and finding projects that not only I love but works out on both ends.

Would you return for a WWE event in the future?

Oh my goodness, for sure. WWE, for me, is where it all started. You never know, I could show up on a Monday Night Raw, I could come down to SmackDown Live and snatch that title real quick. Never leave me out, you never know what's creeping around the corner, if you know what I mean.

Do you think we'll see you pop up on "Total Divas" ever?

You never know. It's definitely a possibility. I love that show and I think everybody needs a little bit of Natalie Eva Marie in their life, so why not spread it everywhere.