Katy Perry has teamed up with Calvin Harris for his "Feels" music video -- and it's a love-hate triangle of weirdness.

In the 1970s-themed psychedelic video, Perry sports a yellow sundress and matching wig while Harris and co-collaborators Pharrell Williams and Big Sean sport similar styles of the time. The four appear separately while singing on what appears to be a deserted island. 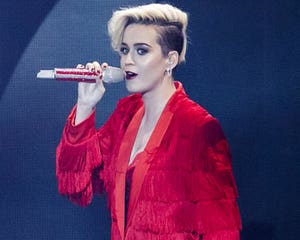 Harris revealed back in May that he was collaborating with Perry, who has been feuding with Harris' ex Taylor Swift for years.

In July 2016, Harris seemingly brought up Swift's squabble with Perry in a tweet that read, "I know you're off tour and you need someone new to try and bury like Katy ETC but I'm not that guy, sorry. I won't allow it."