Nobody on "The View" was having Donald Trump's early morning tirade against MSNBC host Mika Brzezinski, as the entire panel laid into the President over his tweets.

"So with health care, Russia and a travel ban, this is what the guy who's supposed to be running the country is tweeting about?" an exasperated Whoopi Goldberg said at the top of Thursday's show.

"It just makes you sound so ignorant," Sara Haines added, before criticizing Mika for clapping back with a diss tweet of her own. "It's a race to the bottom and no one wins. Let him hang himself, let his words be the ugly ones. You don't go down. I would never compromise my integrity to play on his level." 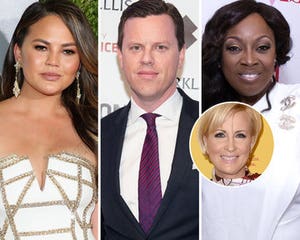 Jedediah Bila stood up for Brzezinski's response though, saying "Mika is not the president of the united states."

"Ideally, he's supposed to be above that," she continued. "There have been many presidents that get criticized by the media and they don't act like this. This is embarrassing because other countries read this twitter feed and there's a lot of people out there defending his policies and they look at this and they're like, 'Come on man!'"

Sunny Hostin said she could actually hear Bila yelling "Are you kidding me?!" in her dressing room when she saw the tweets.

"The thing that's terrible is it's going to be in the National Archives, this tweet," Hostin continued. "It'll be in the presidential library." 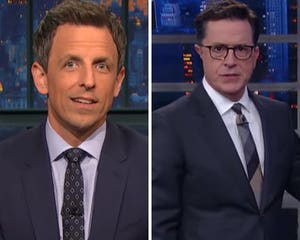 Hostin got Goldberg riled up when she then attempted to point out the "hypocrisy" in Trump's attack by mentioning unconfirmed surgeries he may have had in the past. Those comments were edited out of the video posted to YouTube.

"Now you're doing exactly what he just did," Goldberg said, "Your point is gone!"

"You want to be called by the moniker I will never call you by, because I will not bow down to someone who supposed to be leading my country," she went on. "Supposedly, I should be looking to this person to see where I'm wrong about who you are. This is what you're tweeting? Dude, you really need to get your act together." 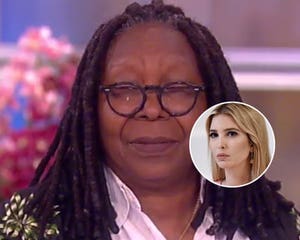 Trump mocked Brzezinski and co-host Joe Scarborough after "Morning Joe" aired earlier this morning, calling them "low I.Q. Crazy Mika, along with Psycho Joe" and saying that at one point Brzezinski was "bleeding badly from a face-lift."

The online reaction was swift, with Mika herself chiming in by posting an image showing box of Cheerios, with the words, "Made For Little Hands."