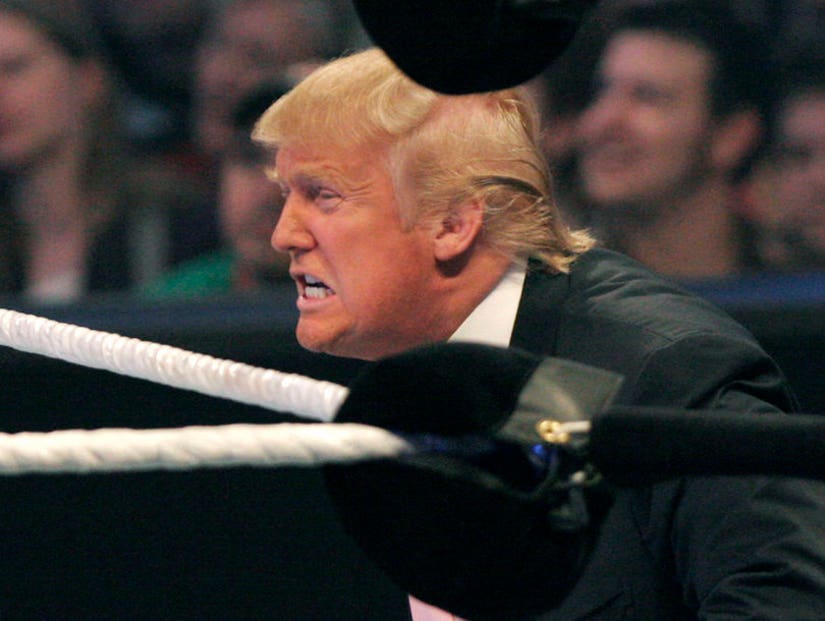 Another day, another Twitter explosion from the President of the United States.

Donald Trump's public clash with CNN reached a new level of weird Sunday morning when he tweeted a meme showing himself body-slamming and punching a man with the CNN logo superimposed over his face. The GIF, which first appeared on Reddit several days ago, was made from a clip of one of Trump's visits to WWE back in the day.

This comes just days after Trump went after MSNBC's Joe Scarborough and Mika Brzezinski on Twitter, claiming he refused to let them join him at Mar-a-Lago because Brzezinsky was "bleeding badly from a face lift."

CNN fired back at Trump's latest tweet with an official statement criticizing the Trump administration:

"It is a sad day when the President of the United States encourages violence against reporters. Clearly, Sarah Huckabee Sanders lied when she said the President had never done so. Instead of preparing for his overseas trip, his first meeting with Vladimir Putin, dealing with North Korea and working on his health care bill, he is instead involved in juvenile behavior far below the dignity of his office. We will keep doing our jobs. He should start doing his."

"The President in no way form or fashion has ever promoted or encouraged violence. If anything, quite the contrary." - @SHSanders45 6/29/17 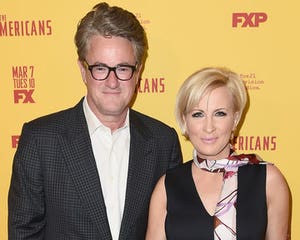 Brzezinski and Scarborough Fire Back at Trump on 'Morning Joe': 'He Fears Women'

Meanwhile, the rest of Twitter took a break from their holiday weekend to pile on the President, with reactions ranging from mockery to alarm.

Remember the time the president photoshopped the logo of a news company on a person and then tweeted a vid of him fake wrestling that logo?

"The President in no way has ever promoted or encouraged violence"-WH
"Who are you going to believe- me or your lying eyes?"-Groucho Marx https://t.co/rrpMHNe1Cn

2017 - the year the office of the Presidency forever lost any significance or meaning. https://t.co/l7bxIwVX1Z

How the fuck are you a president.

'To persevere in one's duty, and be silent, is the best answer to calumny.'
George Washington https://t.co/nvhYdTBF0P

I'm dying to know which staffers got to work on it. Who wrote the scheduling memo. Who did the briefing. How quickly comms signed off.

I highly suggest you take a look at Donald Trumps terrifying last tweet. Its a video of him wrestling 'fake news'
Its hard to accept as real

White supremacy is such that it allows a clearly diminished man to post this and proceed, but blocked the dignity of Obama at every turn. https://t.co/W6HGiRhC4y

Every Republican: Look, I'm not focusing on his tweets

What???? Please, someone. Get out the straight jacket. https://t.co/B8fUowmJx7

He must be stopped before he wrecks it all. 🙄 He needs to go to the doctor. And we need a President. C'mon #Congress https://t.co/bJtPqHK0oR

“The president in no way, form or fashion has ever promoted or encouraged violence.” https://t.co/synQ4hYm2L

This is the President of the United States. 👇🏽 https://t.co/RiKFJOobL3

If President Obama had did this, he would have been kicked out the WH with out a meeting.... https://t.co/NX3uJ5mZGa

our president expressing his desire to murder the press https://t.co/9chGvY0nFS

You are scared of walking down stairs.

Now a good time to remind ourselves that Trump WAS A CHARACTER IN THE WWE, WHERE ADULTS
FAKE WRESTLE EACH OTHER.

Note: If there were no Russia story...Trump's behavior as president would warrant tossing him out on his keister anyway. Pronto.

We're a couple polling points away from Trump tweeting a photoshopped dick pic.

Trump is using twitter to set himself up for an insanity defense when Mueller drops the foot of justice on his orange neck.

There is a kid with a square little CNN head who is having a very hard time right now because he believes Donald Trump beat up his father.

"Guys, I just woke up from the weirdest nightmare" would work as the lede for pretty much every article about Trump

CNN is probably really going to stick it to Trump today by inviting one of his best friends on air to give a fawning defense of his actions.

Remember when they were all "have faith--maybe Trump will surprise you?" The only surprise has been the bottomlessness of hate and stupidity