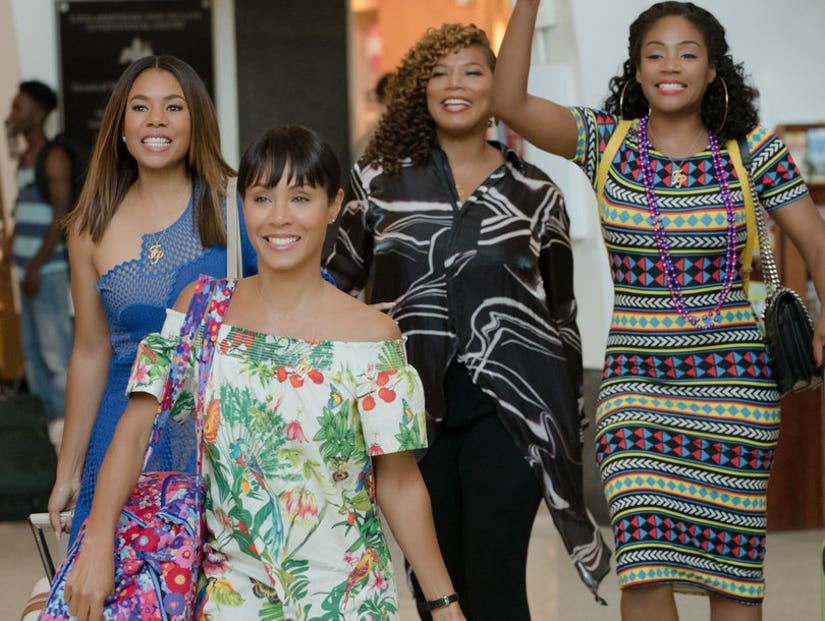 Sorry "Rough Night," but "Girls Trip" is shaping up to be the funniest female flick of the summer.

The first reviews for the Universal film dropped online Wednesday, heaping praise on director Malcolm D. Lee's movie for its raunchy jokes and winning performances from the cast.

While the film stars Regina Hall, Queen Latifah and Jada Pinkett Smith, it's comedian and "Carmichael Show" star Tiffany Haddish who's getting the most recognition for what critics are calling a "breakout" performance.

Take a look at the early buzz below:

"'Girls Trip' has something for everyone — provided that they're old enough to see a hard-R-rated comedy, and not so easily offended that an explicit demonstration of the so-called 'grapefruit technique' would send them running for the exits. The movie's equal-opportunity irreverence makes for a welcome addition to the bachelor-party genre, so often aimed at the frat-boy crowds."

As for Haddish, Debruge calls her "a relative newcomer who nearly runs away with the movie — the way Melissa McCarthy all but stole 'Bridesmaids.'"

“Girls Trip” rivals even “Bridesmaids” in its ability to keep the comic situations coming.

"'Girls Trip' actually delivers on its promise of a liberating good time, thanks in large part to the spirited characterizations and believable chemistry of its four immensely appealing leads."

"The progression from raunchy, raucous laughs into dramatic conflict and then out the other side into the uplifting empowerment of sisterhood and self-worth isn't entirely seamless, but there's too much dizzy pleasure here to get hung up on the flaws."

"'Girls Trip,' a raucous ode to African-American sisterhood, may be [Lee's] most open-hearted effort since 2005's underappreciated 'Roll Bounce.'"

"The movie really belongs to the comedically gifted Haddish ('Keanu'), in yet another potential breakout performance that ought to supercharge her career. While the other women hit their beats in polished style, Haddish brings a seemingly impromptu vibe that raises the bar for each scene."

"'Girls Trip' nails laugh after laugh even amidst — and oftentimes because of — dramatic issues that wouldn't be out of place in a Lifetime movie."

"As the ladies make their way through all the glory Essence Fest has to offer, including run-ins with a slew of big talents in a seemingly never-ending parade of cameos (Diddy makes off with the best one, predictably bolstered by Haddish's involvement) and at least one wildly ill-inconceived adventure fueled by absinthe, 'Girls Trip' keeps the momentum whirling ever onward into the next big comedic set piece."

They couldn't all be glowing reviews though.

"Were the jokes in 'Girls Trip' funnier it would be far easier to overlook the flaws which mar the experience," wrote Lasser. "There are some laughs to be had in the movie, but the balance of serious elements and humor never feels right. It is a movie not just where everyone in the audience knows the outcome, but also where the audience won't understand why the characters can't figure it out as well."