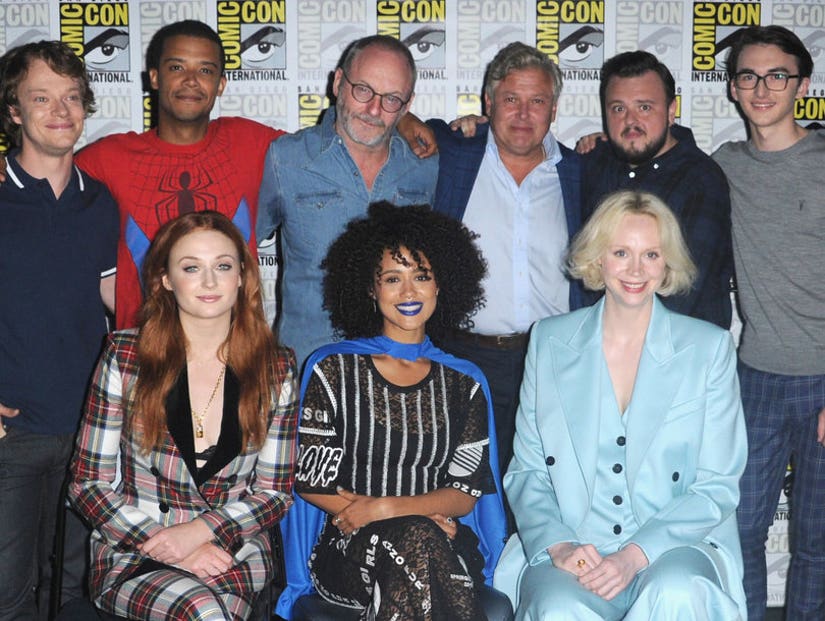 Kristian Nairn hosted the "Game of Thrones" panel inside Hall H at Comic-Con on Friday afternoon, where the cast fielded questions about working on the HBO show.

First, feast your eyes on the new Season 7 trailer previewing what lies ahead, then take a look at everything we learned from the panel.

"If we don't band together we will die."
Watch the #GoTS7 "Weeks Ahead Preview" released in Hall H at #SDCC2017. #GoTSDCC #GameofThrones pic.twitter.com/VdXMwF7R1n

For Brienne and Tormund Shippers

Gwendoline Christie says she doesn't think Brienne gives much care about "how men appreciate her."

"I mean, who doesn't like being appreciated? I don't think that's really what she's invested in at all, I think she's finding it awkward," she added of Tormund's advances.

"Does she like it or does she like someone else?" she then coyly asked, perhaps referencing her relationship with Jamie Lannister.

"It has to be about a mutual respect that's born out of skill and a nobility about your ideals," she said of any love for Brienne.

A Happy Ending for Missandei and Grey Worm?

"I want these guys to be happy and stay together," Emmanuel said of her character's relationship with Grey Worm. "I think they've come through so much, so to see them laugh together and feel something for another person is so beaitiful and I've really enjoyed portraying that journey."

"Maybe there might be a happy ending for them. I daren't say it, just in case," she added.

Anderson said Dany would even help throw their wedding.

Sansa's Coming Into Her Own

When asked whether she believes Sansa's being manipulated by Littlefinger, Turner said she didn't see it that way anymore.

"I think initially there was manipulation. As Sansa has grown, she's been silent absorbing and learning and adapting," she explained. "In my opinion, she's just as good at playing the game at this point."

She said she doesn't think Sansa's really "looking for love" anymore, considering her past. "I think she's woke now ... she trusts no one and I think that's important when you play the game of thrones."

"What's interesting about the Three Eyed Raven is he's one of the few fragments that remain of the old Westeros, the ancient mystical side of it," he explained.

"So what exactly his purpose is, I don't think has been revealed yet," he added. "Clearly it's important. For Bran, this season, it's quite exciting."

"If I could have a superpower, it would be to be all-knowing, which is exactly what Bran is right now," he added. "If that's not one of the most interesting realms there is, I'm not sure what is."

Wine and Education for Everyone!

The cast was asked to reveal what new laws they'd make in Westeros if they were on the throne.

If there were one character that you wish hadn't been killed, who would it be?

What They Hate About Their Costumes

For Cunningham, it was the Battle of the Bastards, while Isaac loved how Hodor's death scene translated to the screen.

Anderson said he loved seeing Yara and Dany meeting. "I thought that was such a powerful moment, seeing these two women come together, it feels like the women are about the own this shit," he explained.