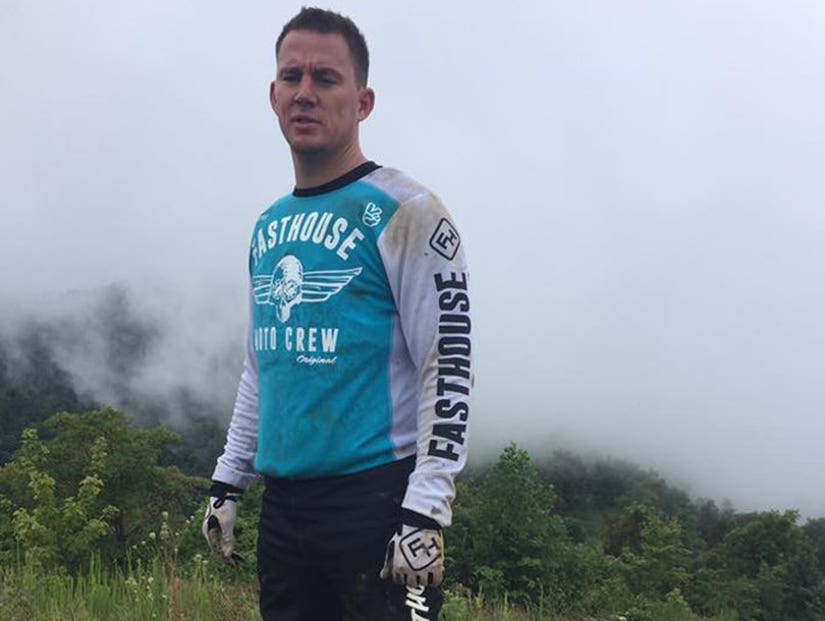 Channing Tatum could've just had a good ole' fashioned one day press junket for his new film "Logan Lucky," but of course, he decided to go all in.

The actor spent the past week traveling through North Carolina making some very random stops along the way in promotion of his new film, and he's documenting it all on his Facebook page.

"Logan Lucky" is the story of two brothers (played by Tatum and Adam Driver) who embark on an elaborate heist during a Nascar race in North Carolina. From chopping down trees, throwing sticks with the locals and strip dancing inside of a gas station - here are some of the best moments from Tatum's hilarious media blitz.

One lucky North Carolina gas station was treated to a stripper dance party when Tatum walked up to the store to showcase his best "Magic Mike" moves.

He grabbed a bottled coffee, hugged Beatrice the store clerk, who joked that she was so down to go with traveling cross-country with him.

On Day 3 and 4 of his trip, Tatum made a number of pit stops where he posed with truck drivers, got into a big rig, stopped for a little gas and even cuddled with a giant dinosaur.

There's actually no way to describe what's happening in this video other than Tatum met a group of young men who were hanging out by a lake when he decided to chat with them.

They told him about some hometown stories before he said he wanted them to ask him anything. They asked him what it was like working with Jonah Hill and Quentin Tarantino, and even proposed some new script ideas along the way.

His Mock "Junket" Interview With Ella

As Tatum previously noted, this media blitz is not like any other junket he's ever done. After explaining what a junket normally looks like, he sat down for an unconventional interview with a young girl named Ella, at her house, in North Carolina.

Normally, press junkets have a movie poster hanging in the background but for this one, Tatum simply put some "Logan Lucky" trucker hats on display.

Dirt Biking, Coal Mining, Hanging Out With The Feds

Tatum made a stop in Harlan County where he took on dirt biking, visited a historic coal mine and took photos at the local police station.

The people of Harlan were also lucky enough to snag some photos with the "Logan Lucky" star saying he was a "cool dude" and it shows a lot of character when he takes time to "connect with local people."

Ridin' Motorcycles and Cuttin' Down Trees

Tatum relaxed a little on the first day of his press tour by riding a Harley though the countryside and chopping down some big tall trees.