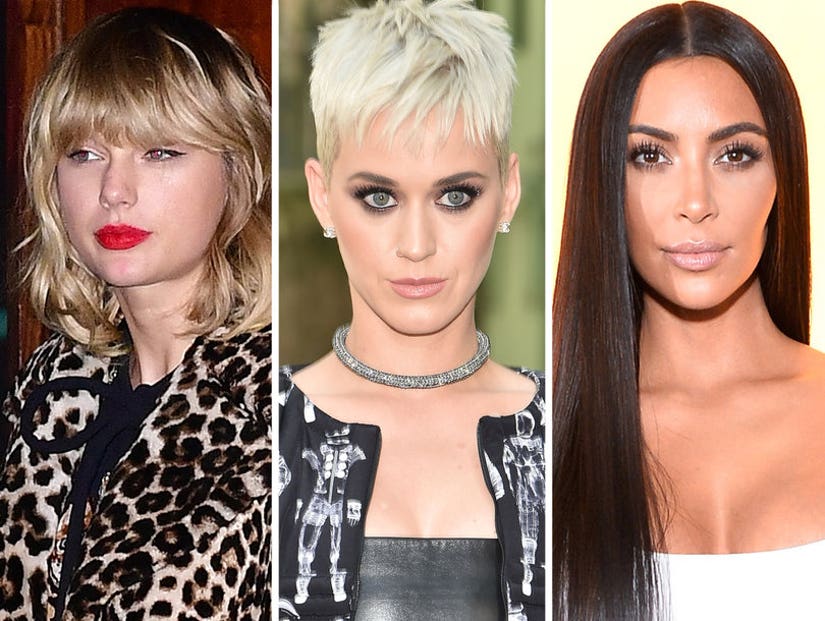 By sharing a simple 10 second video showing nothing more than a reptilian tail, the "Shake It Off" singer not only generated huge interest in whatever she's got planned, but also reignited feud talk with both Kim Kardashian and Katy Perry and drew comparisons to Dany on "Game of Thrones."

A lot of her fans pointed out how Swift waited until the same day Katy released a teaser for her "Swish, Swish" music video -- a song about their feud -- to drop a teaser of her own. While some called the move devious, others thought it could all be a big publicity stunt leading up to a performance together at the VMAs.

Katy: So my music video for Swish Swish is finally droppi...

Taylor: *posts a 10 second video of a cryptic snake on all her social media* pic.twitter.com/Wfrc71RE4j

what type of snake i mean person would taylor be if she didn't post something music wise when katy does?

Not trying to start 💩 but i mean what a coincidence that katy releases the trailer for swish swish and Taylor decides to.. https://t.co/8iXDcmr0lE

Others thought the imagery showed a snake, drawing references to Taylor's feud with Kim K. over whether or not Swift knew Kanye would say "I made that bitch famous" in his song "Famous."

In 2016, Kardashian said Swift gave West her blessing over the lyrics -- on National Snake Day no less -- and snake emojis started filling the comments on the singer's Instagram page. Could she be embracing the title now?

Coming back with a snake. Taylor Swift just ended them all at once. Kanye, Kim and Katy. #TS6isComing 🐍 https://t.co/UkIvgM3nd7

Taylor has taken the form of a snake. Katy Perry, Kim, and Kanye are shook. https://t.co/Pov1w8NMBP

this isn't news, we been knew that Taylor swift is a snake https://t.co/uIkAuMhIGK

me: i don't like snakes
taylor swift posts about a snake
me: pic.twitter.com/ZFwcqecgag

everyone: taylor swift is a snake
taylor: say no morepic.twitter.com/ATt8DYHbuC

media and people to taylor: you're a snake, be a snake
taylor: https://t.co/fpdSP1uaO0

Why do I feel like Taylor Swift's post is a teaser for an upcoming diss track to all those who called her a snake? Hahaha like rap levels

A third faction of fans thought Taylor's tweet showed a dragon, immediately drawing comparisons to the Mother of Dragons on "Game of Thrones."

WHAT IF TAYLOR DROPS AN ALBUM ABOUT GAME OF THRONES LMAO

[Watches Game Of Thrones once.] https://t.co/ALe2GZkXIf

Fairly confident this just means Taylor Swift is voicing one of the dragons on Game of Thrones lol https://t.co/MlZwUbuoGg

WHAT IS THIS GAME OF THRONES SORCERY??? @taylorswift13 is the true Mother of Dragons??? WE NEED ANSWERS. #TS6ISCOMIMG https://t.co/wjo3HdKCzb

Either taylor is going to release an album or she watched game of thrones and she's upset bout viserion.

looks like a dragon Taylor Swift is the 3rd dragon rider from Game of Thrones #confirmed #taylortargaryen https://t.co/4jTyQxDKhH

Taylor Swift is now the Mother of Dragons. Move over Daenerys! #TS6IsComing https://t.co/Yx5kjX87Zu

We're sure there's more to come, so stay tuned.