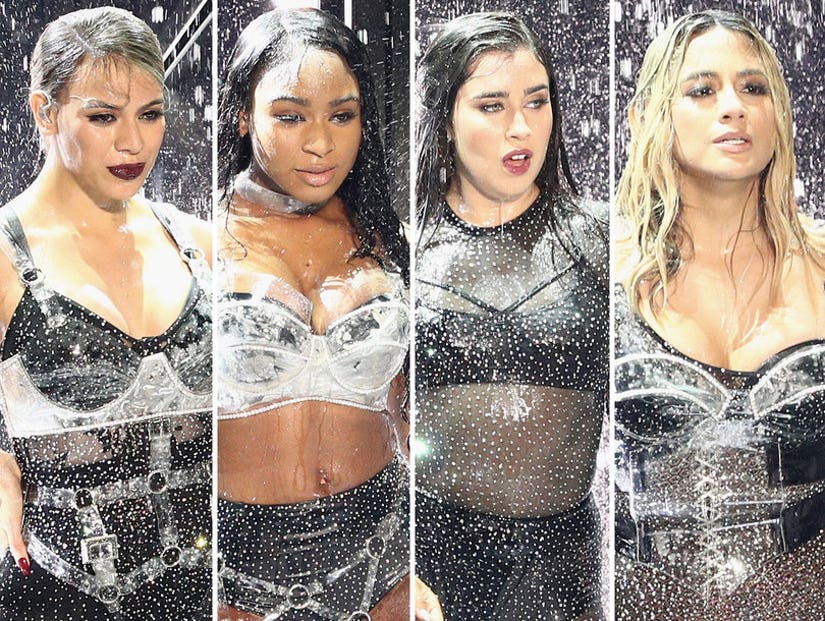 Fifth Harmony threw some major shade in former bandmate Camila Cabello's direction during their performance at the VMAs.

After taking home the award for "Best Pop Song" for "Down," the four member group took the stage to sing their new single, appearing in silhouette with one extra member (video below).

Once the performance started, the mysterious fifth member leaped backwards off the stage, hinting at a not-so-civil exit from Cabello after the "jumped" ship and left the group.

It happened so fast that people might have missed the obvious jab at Cabello, but as always, the internet was quick with reaction and screengrabs of the shady, shady moment.

THE SHADE OF IT ALL. FIFTH HARMONY IS ME

Fifth harmony had the chance to make a performance about women empowerment but instead shaded another woman #VMAs pic.twitter.com/4BWcEbbEuW

Me pretending I didn't see the shade and continuing to support both Camila and Fifth Harmony. #VMAs pic.twitter.com/RzEBMXUlFC

They didn't push her. She jumped herself. They're simply stating the fact that the pass is in the pass and they are now fifth harmony

Fifth harmony has a lot of growing up to do. It's time to leave Camila in the past! It's ok to be sad but let's not be bitter.

It took Fifth Harmony 2 seconds to do what Taylor tried to do in 4 minutes. #VMAs pic.twitter.com/WqVYf4a6oN

That shade from Fifth Harmony tho. #VMAs pic.twitter.com/awoan4bEAi

Fifth Harmony: we don't like talking about Camila it starts drama

Fifth Harmony: starts drama by killing off Camila in their performance

Wait was that shade at the beginning of @FifthHarmony performance #VMAs pic.twitter.com/PXMuH41vr4

Fifth Harmony did that performance & I'm living for the shade thrown at the gworl who left the Group. PETTY YET ICONIC #Vmas pic.twitter.com/5BhLkXDEmK

Fifth harmony dont gotta respect a girl who didn't respect them for the 4 years they were in a band together. So save the tears.

It ain't even shady because that's what happened! She left, she jumped off the ship. They were just introducing the new Fifth Harmony.

Fifth Harmony: *get mad at journalist who asks about Camila because it starts "drama between women"*
Also Fifth Harmony: pic.twitter.com/A72ouLkc76

Fifth Harmony: we don't like talking about Camila it starts drama

Fifth Harmony: starts drama by killing off Camila in their performance

Fifth Harmony at its trashest. This is a clear attempt at using Camila's name with controversy to draw attention to their irrelevant brand

Camila At Home Seeing The Shade Towards Her In Fifth Harmony Performance #VMAs pic.twitter.com/xkVaW82zB9

Me stanning camila and fifth harmony at the same time pic.twitter.com/GuDzu8s9CQ

They'll never ask that to Camila if she wins some relevant award. They want Fifth Harmony to be the shady ones and that's the tea. #VMAs

Fifth harmony can't even have a small talk about Camila, but they can shade her like that with no problem? Bitter

Watch the full performance below: