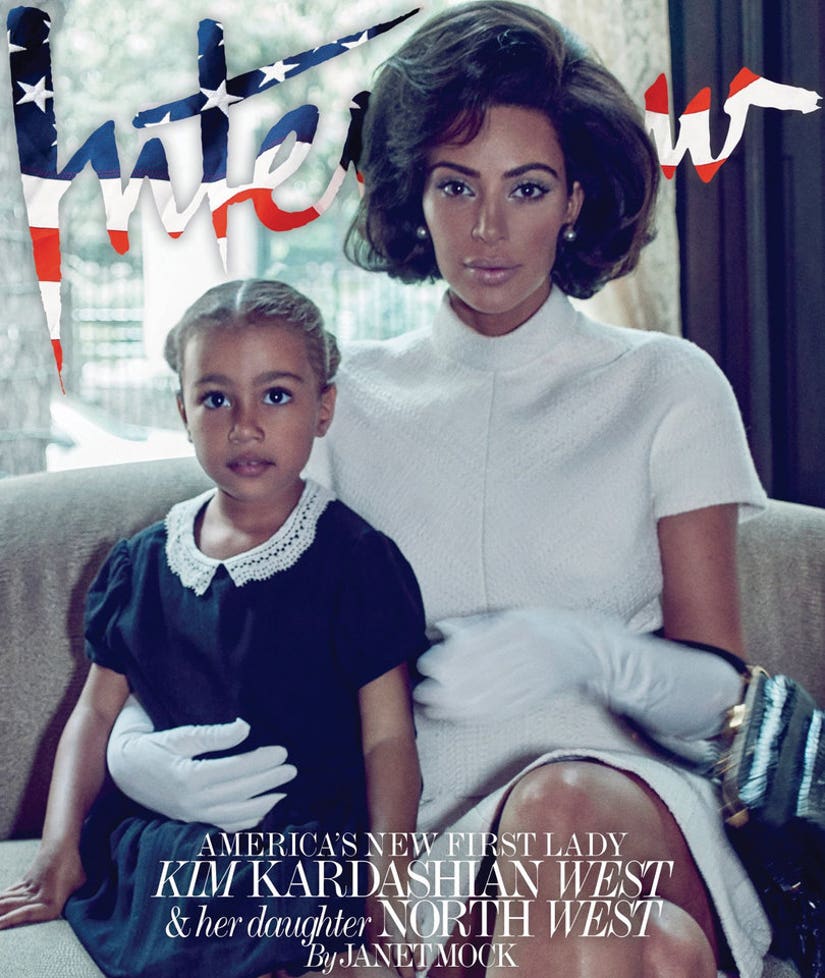 Kim Kardashian is "America's New First Lady," at least according to Interview Magazine.

The reality TV star went full-Jackie O for the publication's September issue, appearing on the cover and inside photos with daughter North West.

Photographer Steven Klein said his goal was to "capture feminine beauty as an expression of empowerment and self-respect. Also, to highlight Kim in a chic manner that is retrospective of a time and yet modern."

While Kardashian said she will "treasure this shoot forever," social media wasn't as kind.

As soon as Kim revealed the images on her social media pages, many were quick to accuse the publication of darkening Kim's skin tone to match her daughter:

just a months ago @KimKardashian was accused of darkening her skin tone for @kkwbeauty & she said that she learned a lesson... @InterviewMag pic.twitter.com/OPaIU1UrpM

They darkened your skin color!? #tsktsk

lol... @InterviewMag since when @KimKardashian has the same color of the skin as her daughter? 🙈🙈🙈 pic.twitter.com/00TaIOZ2qH

Why did we need Kim K to match her daughters skin complexion? She's your daughter, we know this. We can celebrate diversity.

Y TF did they darken ur skin? This makes no sense, America's 1st lady? I just can't with u. Charlottesville, u push ur make up, TX, this. pic.twitter.com/E9R5S1BNiX

Kinda uncomfortable looking at @KimKardashian shoot in her @InterviewMag photos shot by @SKstudly why is her skin much darker...? #confused

Lmfao in what world is Kim the same skin tone as her biracial daughter? https://t.co/94cVMqVqtH

I know for a fact Kim and North ain't the same skin tone so what's up https://t.co/g33iz4fima

Kim really tanned the fuck out of her skin to look like a brown skin woman pic.twitter.com/jsSTEpy89M

Why her and north skin the same color knowing this woman is white hmmmmmmmmmmmmmmm look Kim. Be careful. Like sister like sister https://t.co/vjpSVHfXU8

Why did we need Kim K to match her daughters skin complexion? She's your daughter, we know this. We can celebrate diversity.

Others just hated the idea of Kardashian impersonating JFK's widow:

I hate when they Jackie O celebs up bc it trivializes the tragedy. That woman lost her husband, a country lost a president. No comparison.

Jackie O literally had her husbands brains in her lap, wtf has Kim K gone through that even comes close to that to where she can imitate her

It is laughable to call Kim a First Lady. She could never be Michelle O or Jackie O. Hell, she's barely even Marilyn.

why is Kim trying to be Jackie O.

even Natalie Portman is offended by Kim as Jackie O.

Jackie O turning over in her damn grave right now

KIM K TRYING TO BE THE NEXT JACKIE O. ARE YOU INSANE?!

That is the most ridiculous thing I have ever seen.

is there anything you dont do for attention?

What make this magazine thinks she is a first lady?

what kind of white nonsense is this

This is a disgrace

You are no Jackie O.