"WAGS: Miami" star Astrid Bavaresco is playing the field and it's causing drama with her co-stars.

In a sneak peek at Sunday's new episode of the E! show, Bavaresco finds herself in the hot seat over dating two men at once during a dinner with the other women.

"I feel like when I met Jonathan, I was like, 'Damn,' and when I met Michael, I was like, he's so cute, he's such a nice guy," Astrid says of the guys in her love life. "I have this pressure that I might need to cut one of them off and I think that's such a double standard." 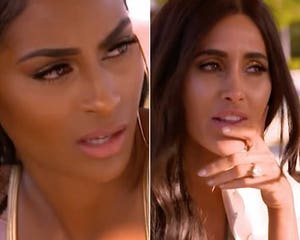 While co-star Kayla Cox says Astrid shouldn't cut either the guys off, she does have a problem with the fact only one of the guys knows she's seeing other people.

"It was Jonathan's curiosity to be like, 'Hey are you dating, what are you doing?' Michael hasn't asked me," Bavaresco explains.

Cox believes her friend needs to be honest with both of them.

The clip ends with a tease of additional drama between Bavaresco and Hencha Voigt, who confronts Astrid at dinner.